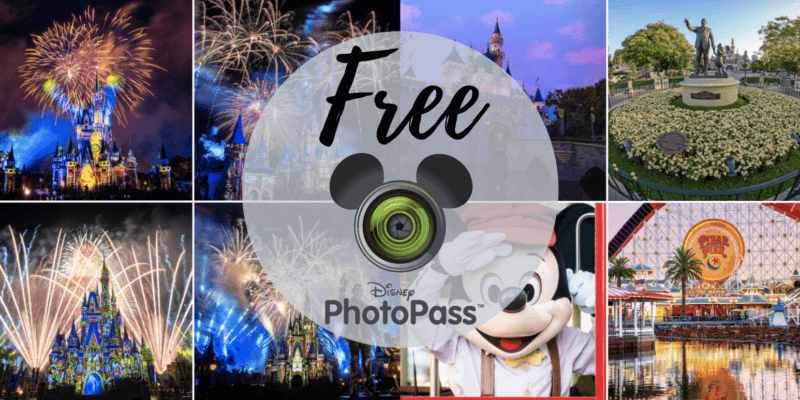 This article has been updated since it was originally published to reflect the latest available free Disney Parks PhotoPass media.

If you’ve been missing the Disney Parks as much as the ITM team has, last night’s stream of the Happily Ever After fireworks spectacular at Walt Disney World Resort probably made your week (or maybe your 2020, at this point!).

We loved seeing our beloved Disney fireworks show again. It’s been too long! Now, the team at Disney has bestowed an extra dose of magic on Disney World and Disneyland fans, no Magic Band scanning or PhotoPass photographer required.

If you have the Disneyland app or the WDW My Disney Experience app, you’re in for a treat. When you login and click “Photos,” you should see four complimentary PhotoPass pictures on both Disney Parks apps.

Both the Disney World app and Disneyland app have pop-up rules and regulations regarding the new free PhotoPass images.

Disneyland app users will receive all of the professional Disney photos seen here including a gorgeous shot of Sleeping Beauty Castle at twilight, the Partners Statue at the end of DLR’s Main Street U.S.A., a photo of Mickey Mouse in his retro Hollywood newsboy outfit, and a stunning shot of a Pixar Pier sunset!

The PhotoPass section of the My Disney Experience app features four different pictures for Walt Disney World fans. All four showcase the Happily Ever After fireworks show at the Magic Kingdom.

The final image showcases the Partner Statue at the Florida Disney theme park. This statue of Walt Disney and Mickey Mouse holding hands can be found at every Disney Park around the world.

On May 1, the Disneyland and My Disney Experience apps each received new Disney Parks images for fans to download! These are perfectly sized to serve as phone wallpapers and they’re sure to send a jolt of Disney magic through you every time you unlock your device.

The Disneyland app has four new downloadable images, including a nighttime view of Radiator Springs Racers in Cars Land, a fun photo of the Pixar Pal Around Ferris wheel on Pixar Pier at Disney’s California Adventure, an eerily beautiful photo of the Haunted Mansion at Disneyland Park, and a brightly colored bouquet of Disneyland Mickey Mouse ears balloons!

Fans of the glitz and glamour of DHS will enjoy a photo of the Tower of Terror’s Hollywood Tower Hotel and four photos of characters from The Incredibles, including Frozone, Edna Mode, and Elastigirl, and Mr. Incredible.

Remember, like Walt said, “It all started with a mouse!” Which of these limited time complimentary PhotoPass images is going to be your phone wallpaper first?

We know how hard it is to wait to get back to Walt Disney World Resort and Disneyland Resort. The best way to beat the Disney closure blues is to start planning your next vacation!

Whether you’re a longtime passholder or a first-time Disney vacationer, the Authorized Disney Vacation Planners at Academy Travel can help you book the perfect Disney experience on either coast. Contact them for a free quote.

Comments Off on Disney World and Disneyland Share Free PhotoPass Media on Apps!