If you’ve been scrolling through Facebook this week, you’re likely seen a viral post that seems as though it’s from an official Walt Disney World Resort account. The post — which claims Disney is giving away free vacations to the Most Magical Place on Earth — actually isn’t real at all. It’s a total scam. Here’s why.

Upon first glance at the post (screenshotted below, thanks to Snopes) you might think it looks like it was posted on an official Disney World Facebook page. But a longtime Disney fan and follower would quickly realize that the page is called “DisneyWorld” — a total fake, considering the official name of the resort is Walt Disney World. On all official Disney World accounts, you would never see the name written as “DisneyWorld.” There’s the first red flag of this Facebook scam. 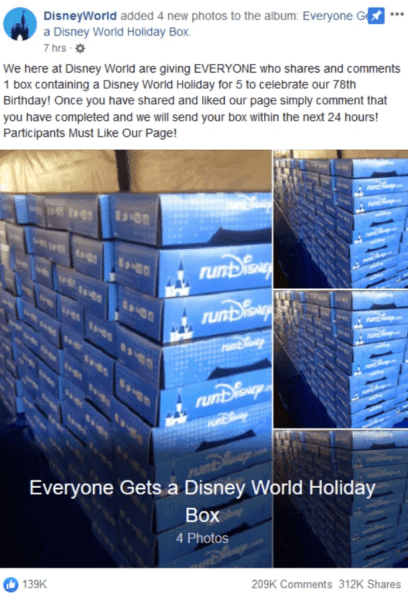 The fake post reads, “We here at Disney World are giving EVERYONE who shares and comments 1 box containing a Disney World Holiday for 5 to celebrate our 78th Birthday! Once you have shared and liked our page simply comment that you have completed and we will send your box within the next 24 hours! .

Another red flag to let you know the post is a fake? Walt Disney World is hardly close to celebrating its “78th birthday.” Walt Disney World Resort opened in 1971, and it will celebrate its 50th anniversary next year in 2021.

And if those weren’t dead giveaways that this post was a scam, remember this: there is only one official Walt Disney World Facebook page, and it’s verified. If you are ever entering an official Disney giveaway, it will be shared via one of Disney’s verified social media accounts, which are marked with a blue checkmark, as you can see below.

More than likely, the people behind this page simply wanted to gain Facebook followers.

But don’t worry if you were tagged in this fake giveaway or if one of your Facebook friends shared it with you. The dubious post has since been taken down. So no magical vacations will be sent in the mail via a “Disney World Holiday Box.”

We’re sorry if you were looking forward to a Disney vacation sometime soon. But we’re sharing plenty of ways to beat the Disney blues on Inside the Magic. If you’re looking for a bit of pixie dust so you can think of a wonderful thought, check out the links below!

Op-Ed: If Your First Time Visiting Disney is as an Adult, It Can Still Be Just as Magical

Want to book a vacation at a great price?

Disney may not be giving away trips for free, but if you want to visit the theme parks in 2020 or 2021, you can count on us to recommend some great resources. The Authorized Disney Vacation Planners at Academy Travel are experts on all things Disney, from Disney World to Disneyland to Disney Cruise and everything magical under the sun. If you want to book a trip to Disney World, Academy Travel can find you the best deal on your hotel, theme park tickets, and even dining. They’re the travel agents we at Inside the Magic use for our own Disney trips, and we know you’ll love working with them too. Click here to learn more and book a Disney trip at a great price!