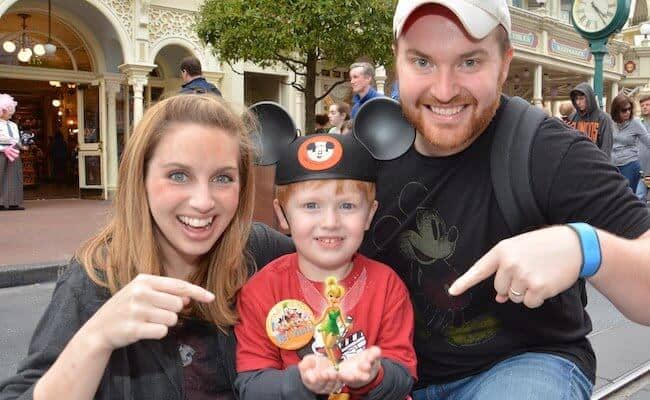 This post was written by one of our Editors, Lindsey Paris, about her son’s first vacation to Walt Disney World Resort. Despite fears and cautions from friends, Lindsey took a bold leap with her then 3-year-old on the first trip to Disney. The following is her own words as she details her experiences with a very young child in the Parks. If nothing else, it reinforces the notion that Disney is for all ages. We agree that babies and preschoolers will have a great time at the Parks if you follow their cues.

6 Lessons My Preschooler Learned From His First Trip Disney

How many Facebook posts have you seen about a kid being “too young to go to Disney?” For me, it’s about a billion. But I am steadfast in my replies that YES, the family needs to go if they are considering it. No, the kids are not too young. Yes, they might remember it. Yes, they will forget some parts. But the TANGIBLE magic that is felt by these young preschoolers and their families lives eons past the vacation.

Stories are told in photos, videos, souvenirs, and outgrown t-shirts. Stuffies are piled upon in the toybox and the spinning light-up Elsa eventually loses her batteries, but the memories continue to grow like her flurries in the air. The lessons my son took home from his first trip to Walt Disney World are priceless, and yours will be, too.

Back in 2015, while I was pregnant with my second child, our family of three was invited to Walt Disney World Resort to experience a #DisneyKids trip, years before I was planning to take my brood. I swooned at the thought of taking my little tyke, but also had to steel myself against the fears in my head that “he was too little” to enjoy it. Would he be able to stand the lines? Would he get too tired? Would be eat anything at the restaurants? Buddy, was I wrong.  It was then I realized that Red was going to learn a lot from this trip:

1. He learned how to travel

Red was three years old. He loved to be at home, playing with Legos and Jake and the Neverland Pirates playset. Aside from the yard, he rarely liked to go out, and always wanted to “go back home.” Now, as a grade-schooler, this thirst for adventure has blossomed, and I’m convinced that this trip started the love it.

RELATED: 10 Educational Shows to Stream on Disney+ While Your Kids at Home

When Red first realized that we were at Disney World, INSIDE Mickey’s World, it clicked. Once we boarded Disney’s Magical Express in Orlando, he began to ease into the idea that this Disney Parks trip was not forever and it was going to be a lot of fun.  It was easier to deal with his energy when he had a definite task and felt in charge of where he was going.

2. He learned to truly wait his turn

Ready to wait for 30 minutes (or more) to meet Baymax and Hiro at Disney’s Hollywood Studios? Ack. I was terrified of the queues. How long can a toddler wait, anyway? At places like the Magic Kingdom, densely populated queues can take a toll on anyone’s patience.  But the repeated action of “let’s wait our turn” followed by the intense magic of a ride or character greeting was all the reinforcement he needed.

We used our FastPass+ wisely and on the occasion, he got to hold the red time card (they are now extinct), he felt extra special (did I mention he likes having a job!?). Using the My Disney Experience app helped us find low wait times for attractions when patience was low, and if we started to struggle, we had no qualms about gently packing up from the theme parks and heading back to the Resort. Some quiet TV time in the Baby Care Centers or a pool afternoon was enough to heal us up.

3. He learned to try new things

Naturally, Red’s first trip to Walt Disney World meant doing a lot of new things, in a new environment. Mr. Homebody wasn’t always open to trying new things, and as I look at him now, he is still timid about some outings. My husband, Chase, asked him to ride a “fast” ride which ended up being his first roller coaster, and Red was thrilled. The 60-second roller coaster was a perfect first thrill ride with gentle zooms. It’s over before you know it.

Check out the video below of their first Barnstormer loop and end celebration! Red also ate new things. A simple chocolate-covered Mickey Ice Cream bar was still too flavorful for my picky eater. After a few tastes of chocolate and peeling of the shell, it was gone in seconds.

4. He better learned to communicate his needs

Since preschoolers can whine and really hit a wall fast, it was important that Red communicate with us on this trip. That meant us asking a lot of questions, and giving him some choices to make.

We did not pack a stroller to bring with us on the trip (mistake!!) because Red no longer uses one at home and he has so much energy we thought we’d just feel it out.  Sure, it did great until we’d been at the park for a few hours, but then ended up on Daddy’s shoulders or not having the best time because he was tired.

RELATED: Tips for Bringing a Baby to a Disney Theme Park

He quickly learned to tell us when his legs hurt, when he needed a break or even was thirsty. Those breaks came a little more often than I anticipated, and I was really proud of him for being so clear and upfront with us instead of waiting and melting down.

It’s important on a trip with small kiddos to stick to your home routine. Early risers? Hit the Parks at rope drop and for early Extra Magic Hours. Still, napping at home? Build in a block of hotel time for a dark and sleepy time out If you go to bed early, head back home most nights to avoid meltdowns and angry days.

For instance, we learned over a few trips that my son, as well as my husband, do better with one table service meal a day. A slowed-down meal with guaranteed A/C means that dining reservations are a must for our family. While we don’t utilize the dining plan (we just can’t eat that much!), chilled-out meal time helps a lot.

5. He learned to be a bolder version of himself

Red grows up a little more as each day passes. His personality continues to develop and I learn more from him than I realize. The passion and strength he shows on a daily basis floored me at age 3 and at age 8.

This perfect long weekend trip allowed Red to explore himself, try new things and reinforce his interests. We were able to plan a trip that catered to his age group but also allowed him to become surer of himself. Check out his trip to Bibbidi Bobbidi Boutique.

He was outrageously proud of his confetti hair and shield. What’s really important here is to reinforce the idea that anyone can wear or do anything, and it has no relation to their gender at all. Don’t box yourself in (or someone else) based on a parameter. Let your inner self flow!

6. He learned that Magic was REAL

When you’re younger, everything is more intense, and most certainly, more real.  Walt Disney World was where Mickey Mouse LIVES and where all his favorite Disney characters live. We could see Pluto, Princess Sophia, and even the towering giraffes at Disney’s Animal Kingdom. Every piece of Disney World magic came alive like nothing else.

Simple things we might take for granted like “it’s a small world” wowed him and produced wide-eyed faces and dropped jaws.  There were several rides that were repeated at Magic Kingdom during that trip, but Chase and I didn’t mind a bit.

The then-budding Memory Maker Photography at Disney World was more magic than usual. See what Red is holding? She happened to be his #1 crush at the time (all because of the Pixie Hollow meet and greet!). “Oh, Tinkerbelle,” he says, with love in his eyes!

As Tink later flew over the castle for the Disney Wishes Spectacular (RIP), Red nearly had a heart attack.  It was an incredible real-life moment, which apparently zapped him of his energy, because five minutes later he passed out in Chase’s arms, right there in Magic Kingdom.

RELATED: Disney Games You Can Play at Home Without Spending Any Money!

I have a feeling he hasn’t ever slept better than that weekend because all that magic was real.  This first trip to Disney World reinforced that anything is possible with a dream and a wish, and that’s something I hope he keeps in his heart forever.

What was the first magic your kids experienced on a Disney Vacation? Leave us a comment below about your First Trip to Disney!