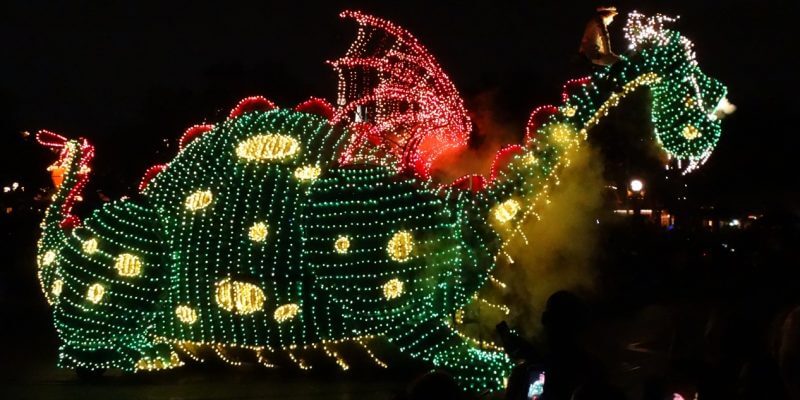 Frequent Walt Disney World guests have been wondering when Magic Kingdom would be getting a new nighttime parade ever since the Main Street Electrical Parade left Florida for California. Well, according to this recent patent as reported by Orlando Business Journal, Disney might actually have something pretty awesome up their sleeves.

We reported back in December that Disney has filed patents that suggest upgrades are coming to Walt Disney World projection shows (think entertainment spectaculars like Happily Ever After at Magic Kingdom, Star Wars Galactic Spectacular at Disney’s Hollywood Studios, and the Tree of Life Awakening at Disney’s Animal Kingdom). We even shared that the technology might be planned for the special effects used in Epcot’s new fireworks show, HarmonioUS, coming later this year.

But after taking a second look and reading Orlando Business Journal’s take, we’re now convinced that the projection technology might be used on an all-new nighttime parade that Disney could have planned for Magic Kingdom.

Has Disney formally announced that a new nighttime parade is coming to the Magic Kingdom? No, not yet. But given this evidence — and how much Disney World fans truly want some sort of new parade at Magic Kingdom — we have reason to think that something’s coming. And we might not have to wait that long.

The patent we’re referring to is called “Ordered Mapping on a Three-Dimensional Projection Surface.” It looks at how media is displayed on 3-D Models, and while Cinderella Castle is a 3-D model, we’re thinking that something like a parade float might be what this referring to. And — as it’s written in the patent — Disney is using a parade float as one example for how this technology can be used.

Disney also included this image with the patent. It looks a lot like a parade float if you ask us!

It’s important to note, however, that this is simply a patent — it’s not an announcement made by Disney indicating that a new parade is in the works for Magic Kingdom or any other Disney theme park, including Disneyland Resort on the West Coast, which is already getting a new parade this year. And if this technology will be used in a parade, we’re assuming we won’t hear an announcement about this for quite some time. But given how often Disney fans are begging for a new parade for Magic Kingdom, we wouldn’t be so surprised if one is planned for the 50th anniversary in 2021.

So what do you think? Are we far off to think that this patent will be used in a new parade coming to Disney World? What do you hope Disney has planned for Disney World’s 50th anniversary that they haven’t announced yet? Let us know in the comments!