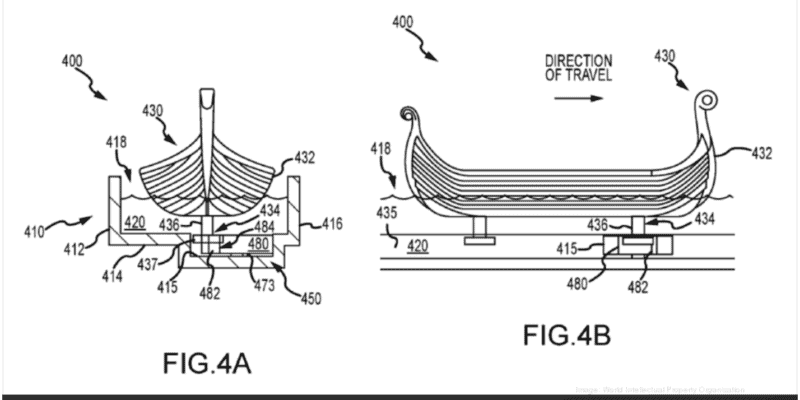 Just before Labor Day weekend, while everyone had their eyes on Hurricane Dorian, Disney published a new patent. Titled “Boat Capture and Launch System for Water Ride,” this new mechanism will be a far more efficient system for regulating boat stops and starts.

No more congestion on “it’s a small world”?

If you have been to Walt Disney World or any of the Disney Parks around the world, you have probably experienced rides like it’s a small world, Pirates of the Caribbean, Splash Mountain, or Frozen Ever After. You would have seen how these water rides operate, as well as how easily they can become backed up.

At Walt Disney World, in particular, many guests find themselves in queues for the unloading dock over half-a-dozen boats long. This is something that plagues attractions like Pirates and Splash Mountain on any busy day. And while many Annual Passholders have most likely memorized Cap’t Jack Sparrow’s entire monologue at the end of POTC due to being stuck in the queue, this patent might mean the beginning of the end of those log jams.

A deeper look at the patent.

According to Disney’s patent–which was quoted by the Orlando Business Journal–the problem is that “slow acceleration of the boats leaving the boat stop can create efficiency issues for the water ride, as slow-moving boats keep upstream boats from advancing until the downstream boat is clear.” So it looks like this new device could be used to help pick up the pace of the boast to retain a more seamless process.

Nicknamed the “Capturepult,” this is both a boat stopper and a boat launcher to increase the initial speed of the boat as each advances forward.

There was no mention of a new water ride in the patent, which means that this will most likely be used to enhance the experiences on pre-existing water rides.

However, those who have witnessed the congestion of Disney’s water-based rides know that the congestion is caused by human error. Pointing out the elephant in the room, people take longer to enter and exit these ride vehicles. On crowded days when more boats are placed on the track at shorter intervals, this leads to buildup and there is only so much efficiency that can be made when the problem is at the dock.

This contraption could fit the needs of a stop-and-go situation beyond the loading dock. Which begs the question: is a new kind of water ride on its way to a Disney park or could an existing ride get a far more ambitious upgrade? Only time will tell.

What do you think Disney is planning to do with this new patent? Let us know in the comments!