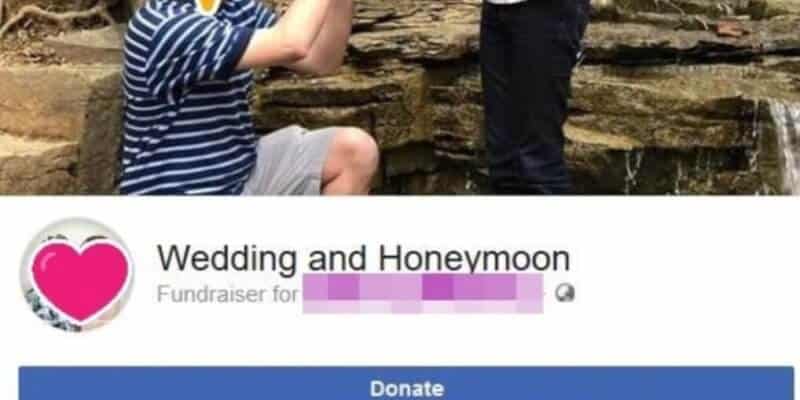 With wedding etiquette and social graces being considered, it might be hard to imagine someone asking such a favor. It might even sound like a joke.

But that’s precisely what one bride and groom have done in preparation for their April 2022 nuptials. A wedding has been labeled a “bridezilla” by some. The woman and her fiance took to Facebook to solicit donations from friends for what they call their “dream (Disney-themed) wedding.”

In a lengthy post on their Facebook wedding fundraiser page, the couple explains that they are in no place financially to pay for their wedding, which probably has some wondering why they would plan so lavishly if they cannot afford to do so.

“Me and [fiance] have a huge debt,” the post reads. “My debt is about $4,000. His debt is his student loan of $10,000. We would love some help with wedding finances to make our dream wedding come true. Let this be an early wedding present.”

The woman even explained what the donated money would be used for, and “lavish” might be an understatement. “The money will be used for my wedding outfit, my fiance’s wedding outfit, decorations for our dream wedding . . . a professional photographer, possible funds for our honeymoon (going on a Disney cruise to the Bahamas, possible first-class flight to the Disney cruise and back and possible best room on the cruise ship.”

She says in her post that part of the money will be used for a dance teacher who can work with the couple to teach them their “own special dance routine.”

The couple’s requests for money for their extravagant wedding and honeymoon didn’t sit well with friends, and some friends were so outraged that they took a screenshot of the fundraiser page and posted it on a witding shaming group page Facebook. The caption under the screenshot read, “We’re poor, so pay for my $22,695 Disney-themed Dream Wedding for us. Think of it as an early wedding present.” That post has since been removed, but it is unclear whether the friends deleted it or a moderator removed it for the group.

While the shaming post was still active, many were quick to blame and shame the feet of the couple: “Maybe everyone should hold paper cups asking people for money,” one comment read. Other words said that the couple had “lost their ever-loving mind[s] wanting people to chip in for a Kim K[ardashian] wedding.” There was no shortage of shame.

“I bet she gives the cheapest gift as a wedding gift,” read another post, but one person responded by saying, “Am I the only one who doesn’t think it’s that crazy?”

The very transparent post proves this couple wants the best of the best: “a trip to Disney World for a couple of days, professional babysitters for kids who have to go with parents to the wedding, and amazing 5-star hotel for the wedding to take place [in], wedding props such as tables, chairs, and invitations.”

Do you think it’s good or bad to ask for donations for your wedding? Do you think the couple is scamming friends? Chime in below!