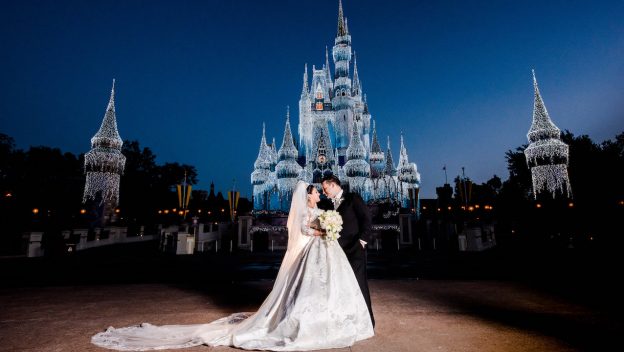 Save the date for more magical moments from Disney’s Fairy Tale Weddings.

New York couple Dominique and Joe bring their large Italian families to Walt Disney World for a winter wonderland wedding. Tune in to see their heartfelt ceremony at Disney’s Wedding Pavilion and then party at their Frozen-inspired reception at Disney’s Grand Floridian Resort Ballrooms. The next couple, Greg and Melanie, are familiar to fans of the first Disney’s Fairy Tale Weddings Special. After a proposal at Disney’s Animal Kingdom, the couple planned a festive and romantic Disneyland wedding. The ceremony takes place at the Rose Court Garden at Disneyland Hotel, followed by a reception in the Royal Theatre in Disneyland Park. For an extra-special dessert, the Disneyland bakery team created a brand-new cake flavor based on the couple’s favorite Disneyland treat.

Be sure to tune in on Monday, December 11 starting at 8/7c for “Disney’s Fairy Tale Weddings: Holiday Magic,” airing during Freeform’s “25 Days of Christmas” event.