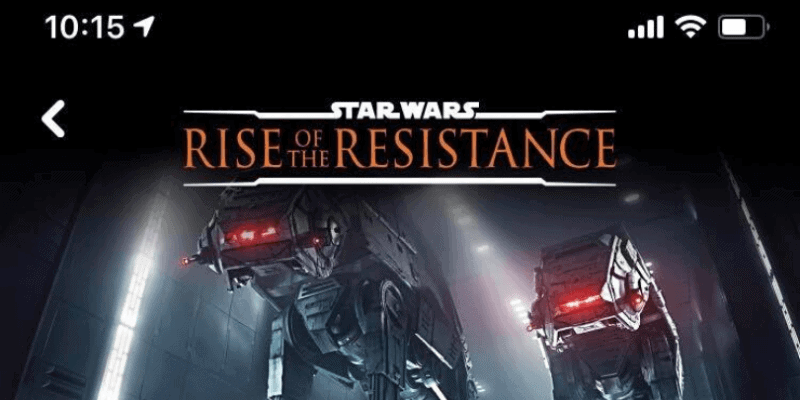 Editor’s Note: This is an opinion article written by a staff member. However, it does not reflect the opinions of Inside the Magic as a whole.

Call this one “Sympathy for ‘the Karen*'”

This morning, I helped cover the Rise of the Resistance’s Opening Day at Disneyland in California. I watched from my home in Tampa as every regular boarding group was full in less than a minute, and over 100 regular and backup groups filled up in less than two. As my editor onsite reported group after group cheering, I stood by writing as they secured their place in line. And I thought about the other people who weren’t so lucky.

At first, the thought of someone standing in the central hub of Disneyland failing to score a boarding group as others cheered around him brought me back to a tree stand in northwest Pennsylvania two days after Thanksgiving, the deerless landscape that lay before me and the echoes of faraway gunshots that filled the air. Like the cheers in Disneyland, they were tell-tale signs that someone’s “opening day” was more fortuitous than mine.

Then my mind raced back into the Park to something, arguably, more relevant. I thought about the parents in that crowd with their kids. I imagined myself as a dad with two little kids. Despite having warned them not to get their hopes up, despite telling them it was no guarantee that we’d get a spot, I had to look down at my little Luke and Leia and tell them that I failed. Meanwhile, a group of Comicon cliches in their late 20s and a group of college students celebrated their success right next to us.

Yes, I am a childless millennial. Yes, I go to Disney Parks with my older family and friends. I think there is nothing wrong with it. But the thought of parents having to tell their kids they did not get in still made me mad. I knew these people didn’t butt my kids and me out intentionally, but I couldn’t help it.

Universal Fans Beg For a ‘Rise of the Resistance’ Style Attraction

A Far More Significant a Loss Than a Mickey Pretzel

Related: Rise of the Resistance Breakdown Ends in Tragedy For Guests

The virtual queue situation is far more significant than the lost mickey pretzel that caused the “Karen” to erupt against childless millennials. But I understand what she was trying to say. In the case of the Rise of the Resistance opening, parents have to tell their kids far more than “we can’t do the ride today.” They have to tell their kids that they can’t make those real memories today. They have to say to their kids that they did all the work for nothing. And it was because a group of childless millennials refused to grow up and took up all the space.

Yes, I understand how the system works. I know that Disneyland is a place for everybody and that Rise of the Resistance is a ride. I know that parents should not promise their kids something they can’t guarantee.

No, I’m not advocating for a change in the system. But I would be lying if I said that to be a parent in the situation mentioned above wasn’t heartbreaking on some level. I don’t want anything to change except the luck of those parents who couldn’t deliver. All I’m saying is, I get it.

I want to say:

I may not agree with you. I may think it was outright stupid and abhorrent the way you started the “childless millennial” debate over a frivolous pretzel.

But I get what you and all your supporters were trying to say.

*”Karen” is a term most commonly used by Millennials and Gen-Zers to describe an all-around entitled parent who is not afraid to let the proverbial manager or the world know how wrong she was treated, usually by someone in the service industry. My apologies to anyone reading this article that’s named Karen. It’s a nice name, and a shame it carries that stigma nowadays.

What do you think about the virtual queue situation? Have you had to tell your kids they couldn’t ride Rise of the Resistance or their favorite Disney ride? Let us know in the comments!