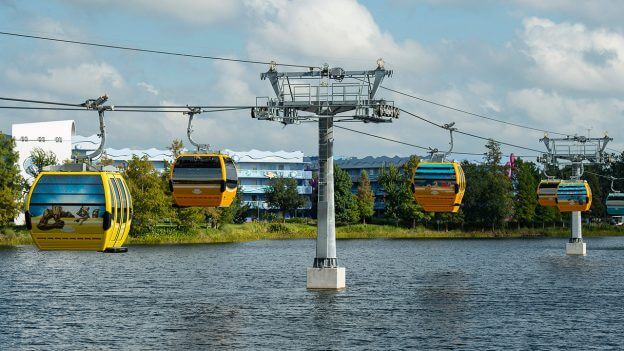 The Disney Skyliner system will be operating a bit later than usual (or ever before) in order for Walt Disney World to accommodate the anticipated larger crowds for New Year’s Eve.

Today, December 31, 2020, the Disney Skyliner system will be running for a total of 19 hours, beginning at 7 am through 2 am on January 1, 2020. (It was also confirmed through Inside the Magic’s call to Disney’s customer service that the system could be staying open even later depending on the crowds).

Most of the normal operating hours for the Disney Skyliner system end around 10 pm or 11 pm, but since Disney is anticipating guests to stay out until after midnight to ring in the New Year, they have decided to keep the Skyliner open later in order to accommodate.

Since it is New Year’s Eve, Epcot will remain open until 1 am and Disney’s Hollywood Studios will be open until midnight.

Though the new transportation system is very unique and decently quick, it isn’t as reliable as we had hoped. In fact, just yesterday Disney guests reported that they were stuck inside the gondola’s and were even informed to open the emergency kits.

This isn’t the first time guests had an emergency on the Disney Skyliner system. Back in October, only about a week after the official opening, reports came in that guests were stuck after an accident occurred.

Because of these incidents, here at Inside the Magic, we find that this transportation system isn’t as reliable as it could be so we recommend having a backup plan or an alternate mode of transportation just in case the Skyliner isn’t operating.

Depending on the time you leave the theme parks, Disney guests can opt to take an official Walt Disney World bus from the park back to your resort or you can always call a Minnie Van for an additional cost.

We hope everyone has a very Happy and Healthy New Year! It’s time to say goodbye to 2019 and ring in 2020. Stay safe, everyone.

Will you be utilizing the Disney Skyliner system anytime soon? Let us know in the comments.