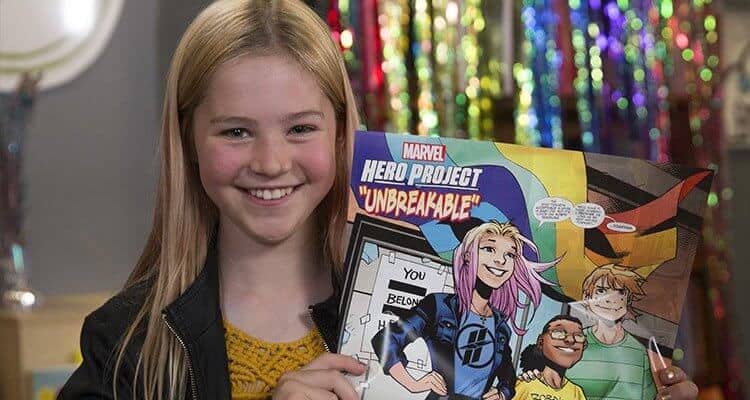 If you are a Marvel fan and you’re subscribed to Disney’s new streaming service, Disney+, then I can bet you have probably checked out its original series, Marvel’s Hero Project.

In case you haven’t, Marvel’s Hero Project is a series which is used to show the differences in everyone, especially in the youth, and to aim to make a difference.

There is one 12 year old that has made a huge impact on Marvel, Disney, and its viewers. Rebekah is a 12 year old transgender who wants to make a difference in the world.

“I can change the world,” Rebekah stated in an episode of Marvel’s Hero Project when talking about the Mighty Rebekah comic, among other things.

We soon learned that Rebekah and her family have actually participated in programs, such as The Garden State Equality Organization, in order to help promote transgender people.

She and her family have been working together to educate the world and making a difference by giving speeches to try and convince others that transgender people are just like everyone else. They want to express that transgender individuals are not bad people like they are sometimes made out to be.

Rebekah has even appeared in front of the New Jersey legislature to attempt for Assembly Bill 1335, which is “legislation to mandate LGBTQ history curriculum in the school education systems”.

While pleading her case to the legislators, Rebekah said “I’ve never seen myself in the history they’re teaching.” She also referenced a variety of well-known and iconic LGBTQ figures to show examples of people who could be taught about in these curriculums.

Props to Rebekah because she made enough of an impact to have New Jersey Governor Phil Murphy sign the bill and the LGBTQ lessons will begin next year!

In a recent interview with Advocate, Rebekah opened up a bit more saying:

“It’s really surprising and cool. But I also think that it’s really important to have a transgender kid in one of these companies because representation is really helpful for kids who are going through their transition to know that they are not alone and that there are people fighting for them.”

And when she was asked what it was like to be a role model, Rebekah responded with:

“It feels really cool to be someone who can help other kids going through their own transitions and also just amazing to be that kind of person to support others and show that trans kids are just like any other kids.”

Rebekah was also asked what she would want her superpower to be if she had one. And she chose acceptance:

“I think my power is acceptance because I accept everyone for their differences and I can empower and tell other people … that everyone is the same and there’s nothing wrong with LGBTQ kids.”

You can watch part of Rebekah’s episode below.

It is amazing to see such a young girl embracing herself and educating others. She has so much ambition and truly wants to make an impact on this world.

Props to you, Rebekah. Keep it up and never lose sight of yourself.

What do you think of Rebekah? Let us know in the comments.