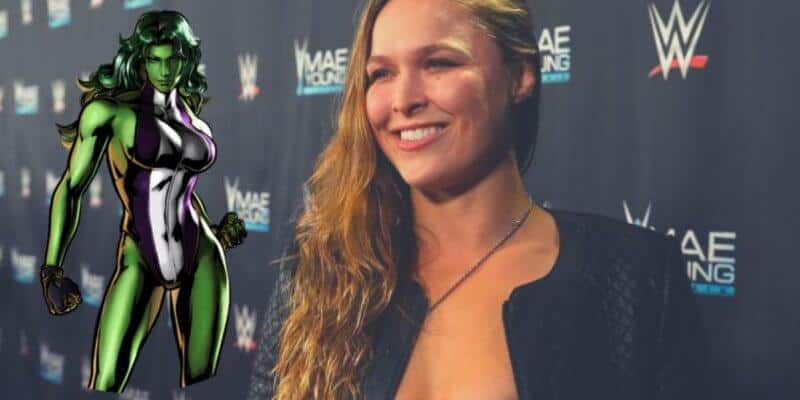 Disney+ has recently announced they will be working on a brand new television series based on Marvel’s popular comic “She-Hulk.” Though we don’t know much information about the series, we just found out a certain someone may star in the series.

Most people know her from her days of Mixed Martial Arts fighting, but she has also made several appearances in the WWE. That’s right everyone, we are talking about Ronda Rousey!

According to We Got This Covered, Rousey is currently being eyed for the role of She-Hulk in the upcoming Disney+ series. This wouldn’t be Rousey’s first acting gig as she has also starred in “Furious 7,” “Mile 22,” and “The Expendables 3.”

Right now, we are still unsure if Rousey has been officially contacted or offered the job, and fans aren’t sure how to feel. Twitter is blowing up around this news and everyone currently has mixed feelings about Rousey taking on the role.

Casting Gina Carano is no different than them casting Ronda Rousey. I think Gina is great but I don't see her for the role of she-hulk, maybe another character. Ronda can be great for either shehulk or a villain. Look up Titania or Ultima. Plus she booking more acting gigs.

Wouldn't be our first choice, but sure. https://t.co/RDNwhCX8nz

She-Hulk (also known as Jennifer Walters) is a Marvel superhero from the 1980 Marvel comic “She-Hulk #1.” The character Walters received an emergency blood transfusion from her cousin Bruce Banner (a.k.a. The Hulk) following an injury. She soon acquired a milder version of Banner’s Hulk condition and then became a large, powerful (and green-tinted) version of herself.

Fans also just found out some news around the new series “Hawkeye”. Hailee Steinfeld could be joining the MCU as Kate Bishop alongside Jeremy Renner, who is set to return as the beloved Avenger himself.  The series is set to be released in Fall 2021.

Disney+ is set to launch in the United States on November 12. We don’t yet know much about “She-Hulk,” but we’ll keep you posted.

Who do you want to see cast for Marvel’s “She-Hulk”?