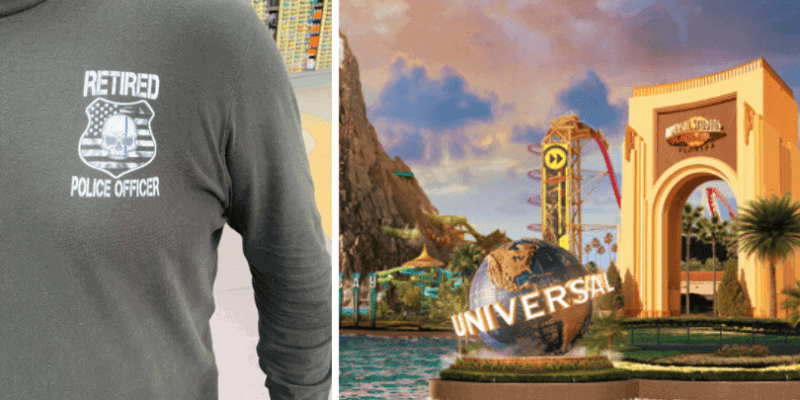 A Universal Studios Orlando guest was stopped at the theme park gates and delayed entry because he was wearing a shirt that indicated he is a retired police officer.

Avid theme park visitors — especially those who actively visit Disney and Universal parks — know that while there’s a lot of leeway for what you can wear. But there are some pretty obvious no-nos: anything with profanity isn’t allowed, cosplay definitely isn’t allowed, and you’re not allowed to bring in a variety of items that Disney and Universal parks have banned. It can vary between the two companies, so always be sure to check the official website for the park you plan to visit so you don’t risk bringing in or wearing anything that isn’t allowed.

But one guest was of course confused when his entrance to a Universal park was delayed because of his shirt. What he was wearing wasn’t considered inappropriate for children and did not display any profanity. Instead, his shirt read “retired police officer.” Universal requested that he change his shirt before entering because it could lead to confusion and guests could think that he was an actual police officer.

Vincent Champion, a 55-year-old law enforcement veteran who served in Ormond Beach, said that the interaction with Universal security and officials who asked him to remove his shirt left him confused and angry.

“I have never been treated this badly,” Champion, who served as a police officer for 22 years, said to the Orlando Sentinel. “It’s usually quite the opposite.”

Champion tells the Orlando Sentinel that bystanders who witnessed the interaction at the Universal park gates defended Champion. The retired officer even took up one guest on his offer of a shirt that he could wear. Champion took the shirt, but he was told he couldn’t even bring his “retired police officer” shirt into the theme park. He said that a Universal supervisor finally relented when he saw that there was no official law enforcement badge on his shirt.

Although this incident took place earlier this month on November 1, it is just coming to light this week as Champion’s interview with the Orlando Sentinel was published on Thursday.

“We have tremendous respect for our law enforcement and first-responder guests and ultimately, this guest was able to wear his shirt,” a statement from Universal spokesman Tom Schroder read. “That said, for safety reasons we want our guests and team members to be able to easily identify active, working, law enforcement. And so, as is common in our industry, we do not permit guests to wear clothing or items that may cause confusion.”

Champion says he will never return to Universal Orlando again.