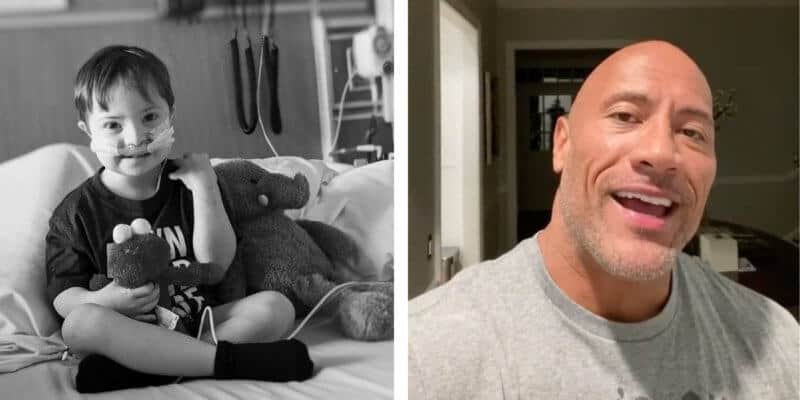 We all know and love him — but now we have even more reason to love him.

Dwayne “The Rock” Johnson, best known in the Disney universe for providing the voice of Maui in Disney’s Animated film, Moana. And now, Johnson just got back into his former character, but for a very special reason.

Johnson shared a video earlier this week of himself singing the hit song that his character sings in the film, You’re Welcome, for 3-year-old Hyrum Harris from Woodstock, Georgia, who is battling cancer.

Hyrum was diagnosed with acute lymphoblastic leukemia last month on October 20, 2019. Since, he has been hospitalized at Children’s Healthcare of Atlanta at Scottish Rite.

Hyrum’s mother, April Harris, said that his treatment has required a lot more care because he also has Down syndrome. “Hyrum has had health challenges for most of his life,” she told Good Morning America.

“We’ve been in the hospital time and time again. He has multiple illnesses — asthma, epilepsy, Chronic Croup, FPIES and some GI stuff as well,” Harries said.

There has been one thing that has been helping Hyrum during his time in the hospital — Watching Moana.

April Harris has been posting daily blog posts to help keep family and friends up to date on Hyrum’s condition. In past blog posts, April has shared how much the film has helped her son get through this difficult, unfortunate time.

April Harris’ best friend from high school, Micaela Brown, had seen her posts mentioning Moana and asked if it was okay with her if she reached out to Johnson’s team. Harris of course said yes.

The family was in absolute shock when Harris received a video a few days later, from the one and only, Dwayne “The Rock” Johnson.

Johnson also shared the video he sent on his personal Instagram account, accompanied by a sweet message for Hyrum.

There’s a little 3 year old boy out there named, Hyrum Harris. Diagnosed with acute lymphoblastic leukemia which is complicated by Down Syndrome. In the fight of his life right now and doing his best to stay strong – by watching MOANA up to 10xs a day because the character he loves, MAUI makes him feel strong. According to Hyrum’s mama, his most important thing to say now is, I STRONG. Yes you are big man. Yes you are. Hyrum, I know I’m a complete stranger to you – who sounds a lot like your hero, MAUI (only with a very large head), but myself along with millions of other strangers who will watch this video are sending you so much love, strength and mana your way. I STRONG. Love, the Rock aka the dude who sounds a lot like Maui.

“In the fight of his life right now and doing his best to stay strong – by watching MOANA up to 10xs a day because the character he loves, MAUI makes him feel strong,” Johnson wrote in the post.

In the video, Johnson said that Harris is, “one of the coolest little boys around,” and is “certainly one of the strongest because he is a fighter.”

“I heard that you love a movie called ‘Moana,’ which is crazy, because I love that movie, too,” he said. “And I also heard that you watch ‘Moana’ almost 10 times a day because the character you love, Maui, gives you strength.”

Johnson continued with “I just wanted to send you a video to let you know how much I love Maui, too…I love Maui so much I know a little bit of his song,” just before singing and rapping the Disney hit from Moana.

Harris said her son had a “beautiful” reaction to the video. “Hyrum’s not completely verbal. He’s three, but developmentally he’s much younger because of his Down syndrome,” she said.

“There’s some words he can say, and one of them is his name, so when Dwayne Johnson said ‘Hyrum Harris’, Hyrum pointed to himself and put both hands on his chest, almost like he’s like a gorilla, and said to himself, ‘Hyrum, Hyrum that’s my name!'”

“It was this moment where Hyrum knew this really special thing had been done for him,” she continued.

She also said that Johnson’s gesture has helped her other children as well, as Hyrum is currently one of seven. “Everybody needs something to push through, and Hyrum may not know who The Rock is, but I guarantee that my 12-year-old and my 16-year-old do, who are trying to go to school every day with their peers and their teachers saying ‘how’s your brother today?'” she said.

“They lose a sense of themselves — and knowing that somebody like The Rock would reach out to our family and leave a message for Hyrum, it gives you enough strength to get through.”

Micaela Brown had also shared a note, letting everyone know how much of an impact of Johnson’s video had, which Johnson, himself, later reposted to.

“April said Hyrum watched it and laughed out loud at The Rock’s head, and every time Dwayne said Hyrum’s name pointed to himself and giggled,” Brown posted.

My heart is overflowing. Growing up military, your friends are family, and years/geographic distance are meaningless….

“Hyrum loved the video, but the family who is up all night working through medication with the baby, the nursing staff caring for all the sick children on the floor, the family across the USA who can’t be there in person – ALL were given a boost – that they aren’t alone…and if they need a little help, they can borrow strength from The Rock,” her note said.

Johnson agreed with the words expressed in the post, and he then decided to respond with his own words, “Joy and hope cost nothing and yet, is the most powerful gift we can give. Thats the real magic to life.”

Update from the video I posted. Look at this lil’ boy, Hyrum’s face. That’s some joy real right there. Thank you to the person who wrote this beautiful note. You’re absolutely right – joy and hope cost nothing and yet, is the most powerful gift we can give. Thats the real magic to life. #hopeforhyrum And thank you to my good buddy, Andy Fickman for texting me Hyrum’s story to begin with??

Harris also said that she wants the world to know that her Hyrum is “just the sweetest little 3-year-old boy that housed the spirit of a lion and and the heart that makes the world okay.”

She said she’s also overwhelmed by the interest in her son’s story.

“Something as sweet as a three minute video has made ripples,” Harris said. “It’s been a beautiful thing for our family and I think for the nation to remember that people need prayers and love and support more than they need anger and anxiety.”