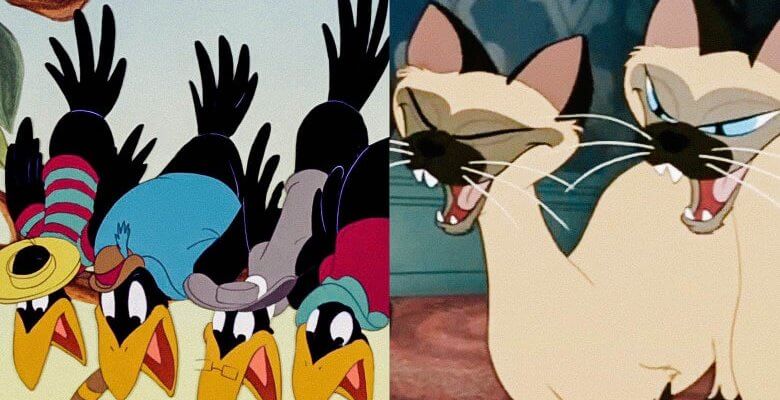 Previously we had reported Disney+ would not be including certain controversial movies, like Song of the South, in its content library when it launched. So far, this proved to be true. But we have recently learned that other questionable scenes that had been rumored to be edited actually made the cut.

The scenes we are referring to come from beloved Classics like Disney’s Dumbo and the original animated film, Disney’s Lady and the Tramp.

In Disney’s Dumbo, you might recall a naughty group of crows, which ironically is also called a “murder of crows”, taunting our beloved Dumbo. In the scene where they sing “When I see an Elephant Fly”, audiences agree the depiction can be viewed as a negative representation of black Americans. Even so, Disney decided to make the animated classic available in its original and unedited form.

This is also the case with Disney’s Lady and the Tramp, the original animated version. We’re all excited to enjoy the live-action reboot of Disney’s Lady and the Tramp, one of the many exclusive new titles to be enjoyed on Disney+. But the original also comes with some questionable scenes that made the cut even though there were assumptions of modified versions being available on the platform.

You might fondly remember the sneaky Siamese Cats and that catchy song we can all kind of remember the words to, “The Siamese Cat Song”. Well, when you pay closer attention to the lyrics and the way the song was sung, you might agree this one would be better left unsung. Which is what the studio decided to do when it came to the live remake. Without giving away too many spoilers, let’s just say the song definitely got nixed for something different in the remake.

Fans have been very vocal about this topic, especially on social media platforms like Twitter. Even beloved Disney stars like Josh Gad jumped have in on the conversation at times, confused by some of the choices. Even so, Disney representatives have confirmed that once a movie title is added to the service, it will stay there for good.

What are your thoughts on these scenes being left intact in these beloved childhood favorites? Do you think they should have been removed? Or do you feel like they are simply a piece of history that should be left untampered? Let us know in the comments!