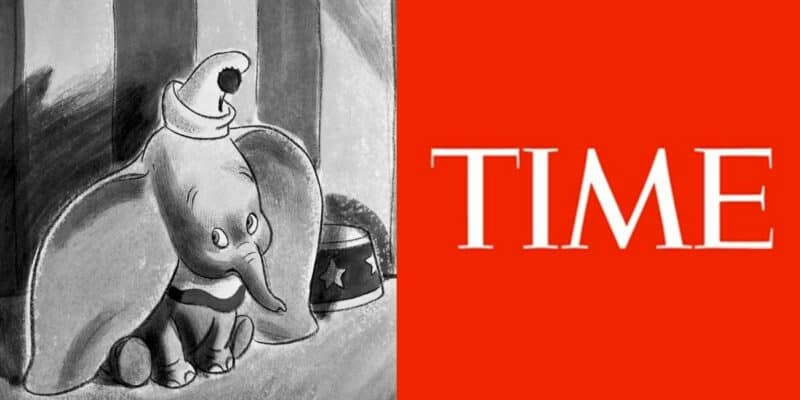 Everyone’s favorite pachyderm almost took flight to the cover of a national magazine after his Disney movie debut. Walt Disney’s Dumbo opened October 23, 1941, to generally good reviews and is now considered a treasured film. But why did Dumbo’s brush with the TIME periodical not come to pass? Let’s take a look at what kept him grounded that fateful year…

Disney’s Dumbo opened to crowds of refreshed theatergoers and critical reviews that highly enjoyed the Disney film. The Walt Disney Family Museum kept a record of the critic’s reviews of the animated film like those from Variety magazine, saying,

“Walt Disney returns in Dumbo to the formula that accounted for his original success—simple animal characterization…There’s a pleasant little story, plenty of pathos mixed with the large doses of humor, a number of appealing new animal characters, lots of good music, and the usual Disney skillfulness in technique.”

Disney’s shortest (and fifth full-length) film was packed with personality, beautiful music and a character story anyone could stand behind. The pint-sized pachyderm’s popularity in the following weeks caused TIME magazine to consider him for a cover model as “Mammal of the Year,” akin to the “Person of the Year” title given to celebrities and activists, or other personalities.

TIME‘s editors “hoping to release an uplifting issue for the Christmas season, commissioned artists from The Walt Disney Studios to draw a black-and-white portrait of the elephant for the cover,” in simple black and white. The first portrait looked too much like an animation cel painting, so instead, it was redrawn in the portrait style heralded by the magazine.

Sans Timothy Mouse, baby Dumbo sits alone in the circus tent, cautiously looking to the side. The artwork sketch was placed on the cover alongside the article, which was edited and ready to go for the December 29th release, until the memorable morning of December 7, 1941.

When the Japanese bombers hit the U.S. Navy base at Pearl Harbor, Hawaii, everything changed. “Priorities immediately changed, the news completely shifted focus, and suddenly the sweet idea of the lovable little elephant that had captured the hearts of moviegoers seemed to trivialize the cover of the nation’s most reliable newsmagazine,” rightly recalls the Disney Family Museum.

TIME‘s redone issue had to be created in less than 36 hours in order to be printed. The cover now featured General Douglas MacArthur of the Philippines, but Dumbo’s story was not fully lost. TIME ran his feature in the “Cinema” section of the December 29, 1941 issue, entitled “Mammal-of-the-Year.”

Dumbo’s full TIME story still lives online, and the 1400-word text frames the baby elephant with big ears’ creation “inside the Disney studio and framing him as a welcome distraction and source of comfort for a country at war: ‘Among all the grim and foreboding visages of A.D. 1941, his guileless, homely face is the face of a true man of goodwill.'” No wonder Dumbo still holds a treasured place in our hearts!

Would you have wanted the flying elephant to get his moment in the spotlight? Leave us a comment with your thoughts!

Comments Off on Dumbo Almost “Landed” The Cover of Time Magazine