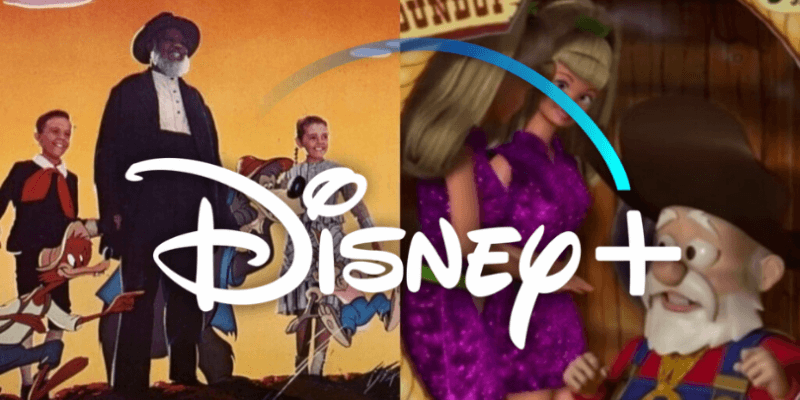 When we originally published this article, we learned from CNBC that Disney+ would not include Song of the South and would edit past Disney movies to exclude racist content. But since Disney+ launched yesterday, we have learned that Disney+ had taken another approach. While Song of the South is still excluded from the streaming service, Disney has decided to include content warnings in the descriptions of films with controversial scenes. You can read all the latest information here.

Heads up, movie buffs. It’s been confirmed that Disney is doing its part to stay out of drama when Disney+ launches, as controversial movies and scenes won’t be available for viewing on Disney’s new streaming service…ever.

In a recent report, CNBC confirmed that Song of the South, the controversial post-credits blooper scene from Toy Story 2, and the Jim Crow scene from Dumbo won’t be available for streaming on Disney+ on launch day — not next week, and not ever.

Song of the South is a well-known Disney film, but not for good reasons. The movie introduced the song “Zip-a-Dee-Doo-Dah” and inspired the popular Splash Mountain attraction at Disney theme parks (including Disneyland and Magic Kingdom), but Song of the South has never been released on home video in the U.S. For this reason, Disney has made the decision not to include it in the Disney+ lineup of available titles.

CNBC reports, “The film has been the subject of controversy since its 1946 release. Critics have described the film’s portrayal of African Americans as racist and offensive, perpetuating stereotypes and utilizing a “black vernacular.” Song of the South was also criticized for seemingly glorifying the plantation system of the post-Civil War South. Because of this, Disney has never released the movie on any home video format in the U.S.”

As we previously reported, the controversial and suggestive post-credits blooper scene from Toy Story 2 featuring two Barbie dolls and Stinky Pete will be edited out of the version on Disney+.

In addition, it’s also been confirmed once again that Disney will be sanitizing its content beyond just excluding films from the lineup of Disney+ titles. The Jim Crow scene from the original animated Dumbo film will be edited out of the film on Disney+ due to its racial insensitivity. This means that the Jim Crow characters will be removed from the film, as they are racist caricatures, and the “When I See an Elephant Fly” song won’t be available for viewing, either. Dumbo already has a pretty short runtime, and this will remove three minutes from the film.

There are plenty of other films that won’t be available for viewing on Disney+ as soon as it launches on November 12, but those will still make their debut on the streaming service in due time.

What do you think of Disney’s decision to censor its content for Disney+? Let us know your take on this topic in the comments.