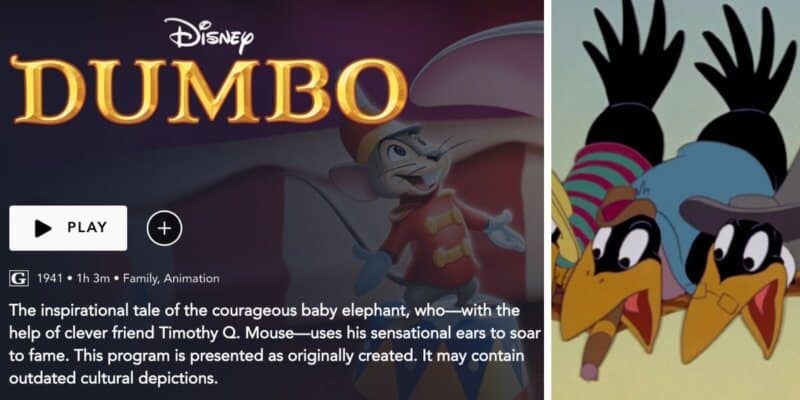 As the launch of Disney+ drew near, there was both a fear and expectation that a PC filter would be put on classic Disney movies, censoring several scenes now deemed too controversial and outright racist. Now that Disney+ is live, it is now clear that Disney had no intention of censoring its content and instead opted for a disclaimer written in each film’s description. This news came at both the horror and relief of many Disniacs seeking their idea of “purity.”

But there is a major problem The Walt Disney Company is faced with: They CAN’T take those scenes out because we find them at what are objectively extremely crucial plot points. Here are three of the most controversial scenes to prove this point:

Please note: This piece does NOT deny the views of the majority today. Instead, this piece stands to prove unfortunately objective points of storytelling and to show a need for us to be able to view stories through a lens beyond our own.

1) Jim Crow and his Murder in Dumbo

Yes, the lead crow in Dumbo is named Jim Crow. Yes, a “murder” is what you call a group of crows, and yes, together, they are portrayed in ways that would make the Twittersphere cry “racist!” But these wise-cracking birds appear in one of the most important scenes in the film.

Why are they so important? THEY TEACH DUMBO TO FLY. They give him the magic feather, and they sing the most iconic song to come out of that movie after “Baby Mine”: “When I see a elephant fly”(which includes an ingenious level of puns). In all the racist ebonics-shouting hokiness, these crows are intended to be seen as heroes in what was written at the time to be a scene that starts with heckling banter and turns into one that’s fun, and literally uplifting.

2) The Siamese Cat Song in Lady and the Tramp

Okay, outside of the obviously racist cartoony Asian voices, this is still just a creepy, annoying, and uncomfortable song that should make everybody cringe. But it is a crucial scene for this telling.

Why are they so important? Because the cats sing their song as they trash the house, and they represent an invasion on Lady’s home on an animal front as well as Aunt Sara’s human front. It is after this that the cats frame Lady for the crimes, and it drives their owner, Aunt Sara, to put Lady in a muzzle. The muzzle was the last straw, and Lady ran away. That scene is supposed to be disturbing and uncomfortable and distasteful from every angle and be a driving force to get Lady out of the house and on her adventure with Tramp.

3) The Indian Tribe in Peter Pan.

I was just going to mention the Powwow scene, but let’s talk about their role in the movie in general. Disney has a horrid track record of portraying Amerindians in a way that that would be favored in today’s society, and the straight-up red-faced, raspy-voiced portrayal of the Indians in Peter Pan is no exception (especially when the “beautiful” women like Tiger Lily are shown to have the most caucasian features, but that’s a-whole-nother can of worms). But they are still crucial to the story.

Why are they so important? Well, for those of you who know Peter Pan, you know J.M. Barrie made them a rather crucial part of the story, and the same is true for Disney’s version. When John, Michael, and the Lost Boys get captured by the Indians, we learn that Tiger Lily was captured by Captain Hook, which sends Peter and Wendy on their quest. The Powwow scene–which is meant to serve as comic relief after the intense encounter with Captain Hook–is what finally disillusions Wendy to Neverland and makes her ready to go home.

In short, there is no clean way to sufficiently clean up these stories other than investing in remakes to re-write movies and Disney canon to fit our time. Adding disclaimers and keeping the movies pure is the best way to go. But this writer wants to challenge every Disniac out there to try to view these movies from the world for which they were released and understand that none of the above scenes were produced to be maliciously racist and degrading. Society has a way of making things once okay be not okay anymore.

We should teach the next generation of Disniacs to see that dissonance between the moviegoing world of the past and today so that they can still appreciate these films for what they are, and still see what is good and funny today while understanding what is not OK anymore. Believe it or not, it is possible. Getting hung up on every PR blemish–with Disney or otherwise–is just as bad as agreeing with or blatantly ignoring them.

What do you think of Disney’s decision? Should they be left alone, or should the PC police eliminate all content deemed unfit for today’s eyes and ears? Let us know in the comments.