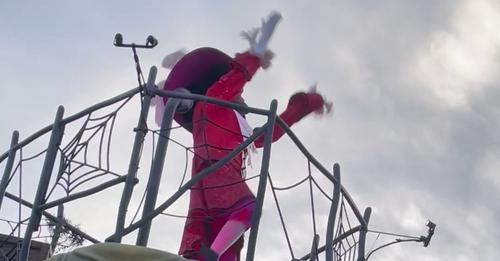 Another strange wardrobe malfunction has occurred — and this time, First Mate Smee wasn’t present to fix it!

It appears that there was another weird wardrobe malfunction on September 19 during this particular Halloween Parade at the Walt Disney Company and the Oriental Land Company’s Tokyo Disneyland theme park in the Tokyo Disney Resort (which also houses Tokyo DisneySea).

The Villains Rockin’ Halloween Parade has been the subject of much discussion lately — even somewhat well-founded fears regarding the safety of Guests and Cast Members after it was reported that the much-loved Disney Villains’ “Minions” or “Underlings” were returning for this year’s Villains Rockin’ Halloween Parade. These Villains “Minions” have achieved almost cult boyband-like status, with swarms of fans thirsting after these villainous Cast Members descending on the Tokyo Disney Resort in a Beatlemania-esque horde, with previous cases of specific Cast Members even getting followed outside the Disney Parks and their schedules tracked by fans.

Now, it seems that the swathes of Disney fans watching the September 19 The Villains Rockin’ Halloween Parade bore witness to another unprompted villainous spectacle — one where the character Captain Hook from the seminal Disney animated classic Peter Pan (1953) accidentally flung his coat sleeve into the watching Guests below.

Captain Hook was spotted dancing enthusiastically on top of his Halloween Parade float to the Rockin’ beat, when a particularly large hand gesture during the parade’s dance choreography caused his coat sleeve to get flung far off into the audience of Guests watching below. The Villains Rockin’ Halloween Parade route was passing by Westernland when this occurred.

Twitter user @shirokuma_Dis managed to catch the moment, their camera floundering a little but managing to catch Captain Hook’s rather funny reaction:

The sleeve was retrieved by Cast Members.

As a side note
Usatama (Tokyo Disneyland Easter Parade) Donald’s unfortunate incident
It’s been going on for years
The first time it happened, I was watching it at the “prime Donald position”…
#TDR_now
#TDL_now

Undeterred by the sudden loss of his costume’s sleeve, Captain Hook looked down at the Guests, bewildered, before hilariously looking at his hand (and hook) in shock! As @shirokuma_Dis mentioned, the sleeve was eventually retrieved by Cast Members. The story doesn’t end there, however!

Apparently, Disney Park Guests and fans who were present at Tokyo Disneyland that day also noticed something funny — Captain Hook’s First Mate Smee, who is usually the one getting yelled at by the irate Captain to clean up his problems, was spotted taking a relaxing spin inside one of the teacups at Alice’s Tea Party in Fantasyland just an hour before the coat-flinging incident!

As a result, Captain Hook’s sleeves disappeared the moment he entered Westernland…

SMEE! Some people said that, but Smee was having fun in a teacup an hour before Rockin’…

It appears that Smee is taking a well deserved day off, and Captain Hook will just have to live with the consequences of his (wildly flailing) actions.

What do you think of this odd wardrobe malfunction? Share your thoughts in the comments below!