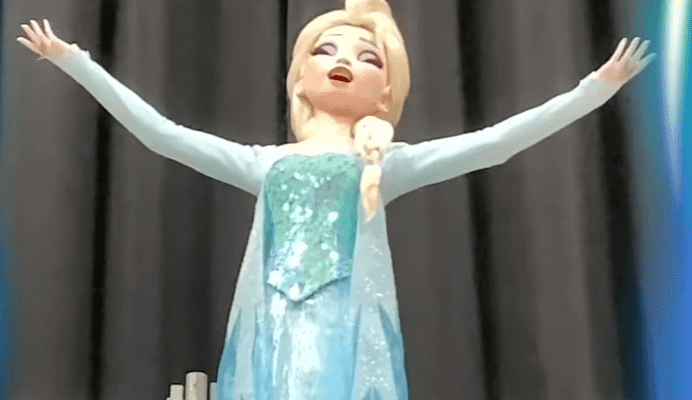 We’re headed into the unknown with this unreal new Elsa animatronic and Frozen experience!

The D23 Expo was held this past weekend, and it saw a whole host of Disney fans descending upon California to hear announcements directly from the House of Mouse!

Disney Parks fans, in particular, were treated to a fun Disney Parks panel today, with Chairperson of Walt Disney Parks and Resorts, Josh D’Amaro coming forward to share the newest about the Disney theme parks — and now we’ve got this sneak peek of an astonishing new animatronic slated to debut at a Parks Frozen experience that’s unlike any other!

Speaking about the newest Frozen-themed expansion at the Tokyo Disney Resort’s Tokyo DisneySea, set within the new Land or “Port of Call”, Fantasy Springs, D’Amaro shares that the new animatronics at the theme park will contribute to making this an experience that’s truly one-of-a-kind.

It’s gonna be a Frozen experience that you just will not find anywhere else in the world.

The animatronic in question is frightfully realistic, and sings the song “Let It Go” from Frozen, in Japanese.

Scott Gustin, who was present at the D23 panel, shared the following clip of Elsa of Arendelle — in action:

And it seems like fans are already jealous, comparing this new Elsa animatronic to the one over at EPCOT’s Frozen Ever After ride!

this one looks so much better than Epcots Elsa omg

this one looks so much better than Epcots Elsa omg https://t.co/PtqGHAbLyV

This is what the Elsa animatronic in Epcot should have been

This is what the Elsa animatronic in Epcot should have been

Yeah, Oriental land company was like, get these screen faces out of here.

Yeah, Oriental land company was like, get these screen faces out of here.

The Oriental Land Company that’s being referred to here is the actual owner of the Tokyo Disney Resort and its associated Disney Parks over in Japan, Tokyo Disneyland and Tokyo DisneySea. While Disney owns the rights to all the Intellectual Property and are the creative team behind the Disney Parks’ Imagineering, the two Japanese Parks are funded and owned officially by the Oriental Land Company — who have long been said to be masters at maintaining the quality of the Tokyo Disney Resort unlike any other, and even known for spending a fair bit of money (as that’s all they have to worry about).

This Elsa animatronic seems to be another little tease that highlights the Oriental Land Company’s “spare no expense” approach, and also effectively showcases the true genius and capabilities of the team over at Disney Imagineering!

What do you think of this new Elsa animatronic? Would you visit the Tokyo Disney Resort to experience the new Fantasy Springs expansion? Share your thoughts in the comments!