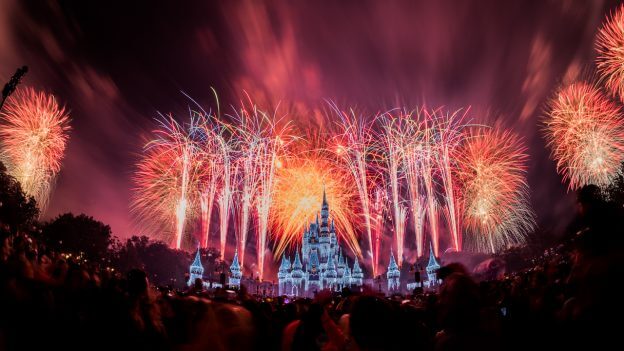 If you want to ring in the 2020 New Year the right way, then you’ll want to be at Walt Disney World Resort.

Start the New Year off right with amazing events that can only be found at Walt Disney World. From rooftop celebrations and special champagne toasts to one-of-a-kind meals, dance parties with live music, and character meet and greets, there are several ways you can countdown to midnight and celebrate New Year’s Eve with true Disney magic!

Here is a list of special New Year’s Eve events happening throughout the resorts at Walt Disney World. Keep in mind that these events are extremely popular and tend to fill up fast, so be sure to book your reservations now by visiting the official Walt Disney World website or reaching out to an Authorized Disney Vacation Planner.

Disney guests can countdown to midnight and ring in the New Year at Disney’s Contemporary Resort thanks to this special event. An Elegant Evening Under the Stars at the California Grill will allow you to give a champagne toast but in a unique setting, which is inspired by California wine country.

Take in a mesmerizing experience from a slick magician or have your moment captured thanks to a unique hand-drawn by an artist on hand. But what’s New Year’s without delicious food? Disney guests can indulge in delicious finger foods as you mingle and celebrate.

End your evening with beautiful views of Walt Disney World fireworks. (You may even run into some of you favorite Disney characters throughout the night.)

Disney guests can ring in the New Year at an elegant party at Toledo – Tapas, Steak & Seafood, which is the new rooftop restaurant located at the top of Gran Destino Tower at Disney’s Coronado Springs Resort.

This unique celebration will feature a delicious Spanish cuisine inspired menu alongside an electric flamenco guitarist who will play during your meal. Then continue the party alongside a DJ in Dalhia Lounge who will play up until the New Year countdown! And thanks to the windows of the restaurant and the Dalhia Lounge balcony, Disney guests can take in spectacular views of the Walt Disney World Resort as well as a glimpses of Disney fireworks in the distance.

Mezzanotte at Topolino’s: An Italian Masquerade at Disney’s Riviera Resort

If you are looking for an exquisite and elegant experience, then head over to this rooftop restaurant. Come in your best dressed and wear don custom colorful masks to this special New Year’s Eve party as this Italian masquerade ball comes alive with Disney magic.

Alongside an amazing DJ accompanied by champagne toasts and traditional music and vocalists from the Italian Riviera, Disney guests can ring in the New Year like never before. Guests attending this special event will also be offered a buffet of food, á la carte tapas-style dishes, as well as action stations where talented Disney chefs can create your dish right in front of you!

Disney guests can also countdown to midnight as they take in the outstanding views as neighboring Disney fireworks displays will light up the night.

Other than the three rooftop celebrations, Disney guests can choose from a wide variety of special events and dance parties that will help ring in the New Year accompanied by Disney magic.

Over at Disney’s Contemporary Resort, Disney guests can start 2020 off right with one-of-a-kind cuisine, live music and dancing, as well as unique photo opportunities.

Thanks to the live band, Disney guests can dance and dine the night way, all the way into the New Year. When the clock strikes midnight, be sure to cheers with a toast while taking in the sights of the New Year’s Eve fireworks over at Magic Kingdom Park.

Disney guests can extend their celebration at the Countdown to Midnight: A New Year’s Eve Celebration with this pre-party add-on.

Inspired by the Walt Disney Animation Studios Ink and Paint Department, this private area is is available to you throughout the evening, and after 11 p.m., you will experience a private outdoor private of the Magic Kingdom Park fireworks — along with desserts and a Champagne toast, of course.

Are you a fan of Pixar? Do you love films like Ratatouille or Toy Story? Then you’ll have to check out the Pixar Party: A New Year’s Celebration.

Disney’s Pixar fans can take a trip down memory lane as toys, monsters and supers come out and play at this exciting event, located on the second level of Disney’s Contemporary Resort where Disney guests will find two ballrooms which have been transformed into the Pixar world.

During this event, you can come face to face with some of your favorite Pixar characters, dance to live music provided by a DJ, go to Boot Camp with Sarge and more. Make sure you come hungry because there will be a Pixar-inspired dinner buffet which will feature dishes like Ratatouille, slow roasted beef tenderloin, white cheddar baked mac and cheese, and for dessert, crème brûlée tarts!

New Year’s wouldn’t be complete without fireworks so attendees will be able to step outside to a special viewing area as they enjoy the New Year’s Eve fireworks display at Magic Kingdom Park.

Disney guests can also head over to the Atlantic Dance Hall this New Year’s Eve as they will be kicking off 2020 with music, treats, and Disney magic as guests count down to midnight.

This special celebration will include one-of-a-kind views of the Epcot Fireworks as well as a live DJ, special party hats and horns, a confetti drop, a finger food menu, and of course, a complimentary Champagne toast at midnight.

Disney guests can celebrate the New Year with their family and friends at Flying Fish, while being surrounded by an elegant atmosphere and dine on a multi-course, prix fixe dinner menu, created by award-winning Chef Tim Majoras.

And last, but certainly not least, if you’re looking for an incredible opportunity, check out the waterside New Year’s Eve dinner at Narcoossee’s at Disney’s Grand Floridian Resort & Spa.

If you are looking for a relaxed, casually elegant experience then you’ll want to reserve an earlier dinner time, but for an upbeat upbeat three-piece band and a dance floor, be sure to book a later dinner.

Do you want to celebrate New Year’s Eve at Walt Disney World?