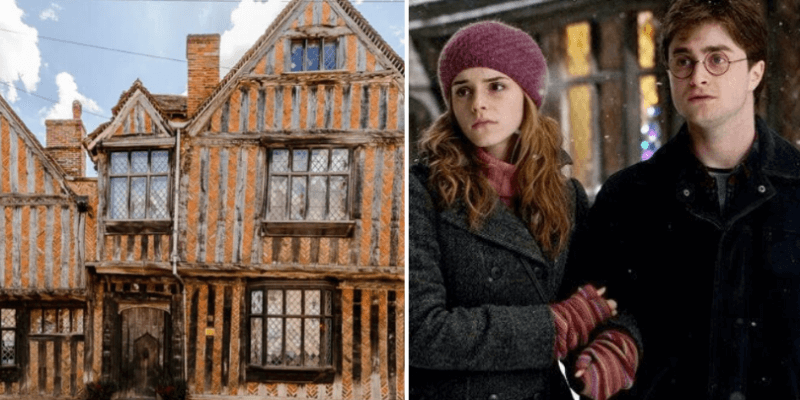 The 14th-century De Vere House in Lavenham, Suffolk, England is the actual real-life location of the Godric’s Hollow house. Fans of Harry Potter films will remember Godric’s Hollow as the place where Lord Voldemort’s snake Nagini ambushed Harry after he visited his parents’ graves at his family home on Christmas Eve.

Now, Harry Potter fans can stay at this house — as long as they’re okay with it being haunted.

Indeed, the De Vere House in real life is just as eerie as it seemed in the Harry Potter films. The house reportedly has quite a gruesome history that dates back centuries, and it was actually the house’s real-life history that provided inspiration for the house where Harry was born and his parents were murdered. Staying in a house like this isn’t for the faint of heart. But if you’re a massive Harry Potter fan or you love haunted places and scary stories, this might be the perfect vacation destination for you.

Currently, the residents of the house, Jane and Tony Ranzetta, are listing one room in the house as available for rent on Airbnb. The Ranzettas have lived in the home for over 20 years and claim they have witnessed paranormal happenings in the home and on the grounds. Tony also claims that J.K. Rowling created the Gryffindor house ghost Nearly Headless Nick through inspiration by one of the property’s resident ghosts, Sir Francis De Vere. Nick’s outfit in the Harry Potter films apparently bears a striking resemblance to the costume that Francis’s is seen wearing in his portrait.

Tony Ranzetta explained how the De Vere House became an inspiration for the  Harry Potter films:

“J.K. Rowling was well acquainted with the village and we know her friend stayed here whilst she was in the process of writing the books, it was surely in her mind when she created Godric’s Hollow. The house is often referred to as ‘The Harry Potter House’ by locals and in the media, and a huge picture of our front door can be seen at the Warner Bros’ exhibition on the making of Harry Potter. The whole story is quite peculiar really. Just after we first moved into the house, Jane saw a uniquely dressed man walk through the kitchen wall and into the garden beyond. She was obviously taken aback but understands that a house with this much history must surely hold echoes of the past.”

This Harry Potter house has even retained some of its period features. Those who come to visit and stay overnight will see including a huge timber frame, fireplaces, wall paintings, and a rare stone spiral staircase with a carved brick handrail. And of course, there’s the possibility that you might catch a glimpse of something paranormal while you’re there.

Interested in booking this house for yourself? You can use our link here. But if you’re not able to make it to the U.K. anytime soon, remember that Universal Orlando and Universal Studios Hollywood both host Halloween Horror Nights, where you can get just as creeped out by mazes, special effects, and scare zones! Plus, year-round you can visit the Wizarding World of Harry Potter at Universal Orlando Resort and Universal Studios Hollywood.

Would you ever stay in this Harry Potter house, even if it’s actually haunted? Let us know in the comments!

Comments Off on Stay in the real-life haunted house from “Harry Potter”!