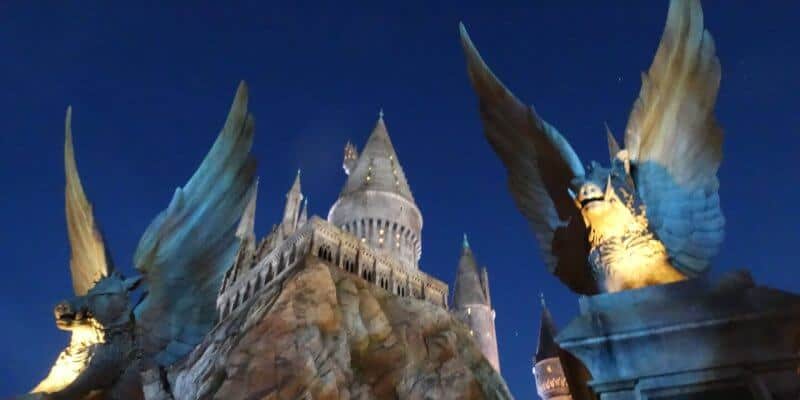 The magical adventures of Harry Potter first arrived in a series of popular novels by J.K. Rowling in 1997 and were followed by eight motion pictures from Warner Brothers from 2001-2011. Universal Studios added this wonderful Wizarding World to their theme parks in 2010 (Orlando, FL).

The oldest and original Universal Studios theme park, in Hollywood, California, was the last to receive attractions and experiences based on Warner Brothers’ movie adaptations of The Boy Who Lived. In the spring of 2016, the Wizarding World welcomed muggles to a new California collection of excitement. With Hogwarts Castle as its centerpiece, Hogsmeade Village is home to two attractions, engaging entertainment, a mix of magical shops, and Harry Potter-inspired delightful dining.

Flight of the Hippogriff – This junior roller coaster is suited for young witches and wizards to be. By excluding high speeds, excessive dips and loops, its course is much tamer than traditional coasters. Guests board a wicker-like representation of the fabled Hippogriff found in the Harry Potter books and films. Once instructions on etiquette are explained by Hagrid, riders enjoy a journey across Hogwarts grounds, past Hagrid’s hut and eventually meet Buckbeak.

NOTE: “This ride employs safety restraints which may restrict certain guests from riding due to body shape and size. Guests whose waistline is at least 40” or greater may not be accommodated on the ride and are strongly encouraged to try the test seat provided at the entrance of the attraction to ensure their ability to ride.” –Universal

Harry Potter and the Forbidden Journey – Deep within Hogwarts Castle are enchanted benches that allow visitors to fly across the grounds. Using this enchanted furniture, Harry, Ron, and Hermione help guests skip class to enjoy a game of Quidditch. Dementors, dragons, spiders and giant whomping willow cause chaos, turning this ordinary diversion into a dangerous adventure.

Harry Potter and the Forbidden Journey blends animatronics and effects (heat and water) with projected scenes, creating an exciting motion simulated thrill ride. Guests must be a minimum of 48 inches (122 centimeters) tall to ride.

NOTE: “This ride employs safety restraints which may restrict certain guests from riding due to body shape and size. Guests whose waistline is at least 40” or greater may not be accommodated on the ride and are strongly encouraged to try the test seat provided at the entrance of the attraction to ensure their ability to ride.” –Universal

Tour Hogwarts Castle – For those who are not up to the fast-paced adventure of Forbidden Journey, wandering through the halls (queue) of this amazing attraction is an adventure in itself. Bronze statues form familiar figures, house points are displayed, classrooms found (keep an eye and ear out for the Potions room), and favorite characters met. Dumbledore greets guests in his office (well stocked with all sorts of magical apparatus, including the insightful Pensieve).

Harry, Ron, and Hermione show up in one rather large classroom with a chilling demonstration of magic. Other treats include animated paintings and a visit to the Gryffindor common room. All of these enchantments are part of the ride queue. As with other rides at the park, guests are free to enjoy the ambiance Universal has cleverly crafted and then exit before boarding flying benches.

Tucked between the snowcapped structures which make up Hogsmeade Village and Hogwarts Castle, a small stage stands ready for enchanting entertainment. Within one shop, wands choose the wizard. Additionally, markers around Hogsmeade provide interactive incantation instruction for making magic.

Ollivander’s Wand Shop– Ollivander’s is a truly enchanting experience where the wand chooses a lucky wizard from the crowd. This particular pairing performance tests the matching wand with a series of special spells that bring the shop to life, ensuring a perfect match.

Triwizard Spirit Rally – To cheer their entrants in the Triwizard challenge, students from foreign schools Beauxbatons and Durmstrang traveled to Hogwarts for the competition. During this short show of school spirit, both camps come together performing acrobatics and choreography in honor of the upcoming challenge.

Wand Magic – Over a dozen locations throughout Hogsmeade Village are marked with a small metal icon. Upon this sign are instructions for several spells which bring windows, creatures and more to life. Special wands are required to make the magic.  Recently added, “Incendio” (forces flame to erupt from nearby chimney top) and “Alohomora” (unlocking the door to a hidden surprise) bring the total interactive encounters to 15.

Special wands (which have RFID chips embedded within) are required to perform spells. Wands can be purchased in the park or online prior to visiting Universal Studios.

Butterbeer and much more can be found within the Wizarding World. Hogsmeade is home to a spellbinding sit-down dining destination, potion-friendly pub, and a pair of snack carts.

Above and beyond the mostly British fare of this quaint restaurant is the ambiance. Details dot the walls and rafters above, encouraging wandering eyes to explore this trusty tavern.

Nine nifty novelties serve as shopping stations for visiting muggles and would-be-wizards. From magical items, robes, and toys to sweet treats and Harry Potter postcards and collectibles, Hogsmeade has a cauldron full of Wizarding World souvenirs.

Dervish and Banges – Magical must have “equipment” like Quaffles, Golden Snitches and Nimbus or Firebolt brooms can be found here. Other enchanted items include Monster Book of Monsters, Spectraspecs, robes and assorted Wizard World garments.

Filch’s Emporium of Confiscated Goods – An assortment of eclectic and probably banned items “liberated” from sneaky students decorate the walls and upper shelves of this souvenir shop.  In addition to collectibles, tee shirts, and toys, on-ride images can be purchased within this shop found at the exit to Harry Potter and the Forbidden Journey.

Gladrags Wizardwear – Robes, ties, scarves, jewelry and other Harry Potter themed accessories (for all four Hogwarts houses) can be obtained at Gladrags. High-end special garments are also on display.

Ollivander’s Wand Shop – In addition to the entertaining experience listed above, Ollivander’s is well stocked with every type of wand imaginable. From character specific spellcasters to original designs, wander in here for the most essential of wizarding tools.

Visiting Hogsmeade Village is a sensory overload that is sure to delight fans of all ages. The details that Universal Creative passionately placed throughout this enchanting escape are a feast for the senses. Meticulously manufactured signs, scenes, and props prove that there is always something new to discover. Be sure to look closely into shop windows and above store shelves for amazing attention to detail and delightful diversions.

Hogsmeade Village is part of the Universal Studios Hollywood theme park, which is located at 100 Universal City Plaza in Los Angeles, California. Be sure to visit the Universal Studios Hollywood website for additional details and ticket prices (an annual pass is recommended for those close by, as is Express Pass for those wanting a shorter wait in line). Hogsmeade Village is open year-round. During the Holiday season, Christmas décor and special entertainment cast a spell over the land.