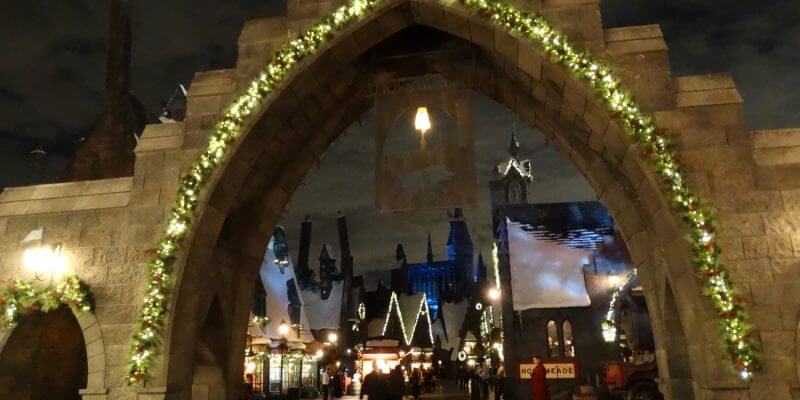 It’s been over a year and a half since The Wizarding World of Harry Potter opened at Universal Studios Hollywood, and the holiday season of 2018 has brought the area’s first major seasonal overlay. Festive lights, evergreen garland, and yuletide-themed food offerings all make Christmas at the Wizarding World of Harry Potter a must-see event in Los Angeles this winter.

During a preview of the experience Thursday night at Universal Studios Hollywood, the park’s new president Karen Irwin welcomed media to see, smell, hear, and taste everything Christmas at the Wizarding World of Harry Potter has to offer. The event kicked off with a song as the a cappella Frog Choir took the stage to perform “Christmas at Hogwarts.”


What followed is the undisputed highlight of the season’s attractions, the all-new projection-mapped light show “The Magic of Christmas at Hogwarts Castle,” which wowed even the most hardened of theme park journalists in attendance. The show does an amazing job– in crystal clear laser imagery– of wrapping Hogwarts in Christmastime colors and lively animation representing various scenes from the “Harry Potter” multimedia franchise.

WATCH “THE MAGIC OF CHRISTMAS AT HOGWARTS CASTLE”:


After the show, guests were encouraged to wander through the attractively-decorated Hogsmeade Village to admire the dressed-up storefronts and to partake in the Holiday Dinner (available at the Three Broomsticks restaurant) and of course the delicacy known at hot Butterbeer.

Overall, I’d say this holiday overlay makes perfect sense. It fits in theme with a specific time of year and a feeling represented in the “Harry Potter” books and movies, and it gives visiting locals and tourists a different flavor to steep themselves in upon stepping through the gates of Hogsmeade. It’s the perfect bit of seasonal accent added to an already-impressive theme park area, and fans of the Wizarding World won’t want to miss it.

Christmas in the Wizarding World of Harry Potter runs from Friday, November 24th through Sunday, January 7th at Universal Studios Hollywood in Los Angeles, California. Be sure to visit the park’s official website for more information and for advance ticketing resources.