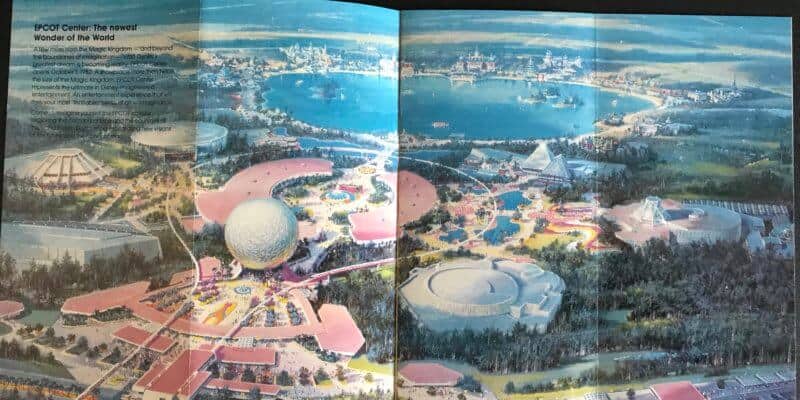 So in honor of the second-oldest theme park at Walt Disney World, we thought we’d share something pretty amazing with you: 1982 brochures from just before Epcot opened!

One Disney fan recently posted on Reddit to share images of his pre-opening brochures advertising Epcot. The brochure, one of which is titled “The Dawn of a New Disney Era: A Commemorative Pre-Opening Guide to Epcot Center,” date back 37 years to 1982. Each is filled with pictures and information all about Epcot, and since we know many Inside the Magic readers are big fans of Epcot and huge Disney history nerds, we thought you’d enjoy seeing the brochures as much as we have.

The brochures have details about Future World — which we love seeing, since it will soon be replaced with three new lands of different names — as well as World Showcase and how each of the countries came to be.

Aside from the images, historical notes, and high quality of these brochures, one of the things we love most is the touches of Walt Disney himself. The back of one of the Epcot brochures, which is titled “Walt Disney World Epcot Center: The Dreamers and Doers,” quotes Walt in the most appropriate way:

“If we can bring together the technical know-how of American industry and the creative imagination of the Disney Organization — I’m confident we can create right here in Disney World a showcase to the world of the American free enterprise system.”

Epcot has undergone plenty of changes since it first opened, but these brochures bright to light the fact that Disney wants to continue to improve the theme park for the better. Many fans believe that the new Epcot will be closer to Walt Disney’s original vision, and after looking at what the theme park used to be, we think that might be true.

Take a look at the Epcot pre-opening brochures form 1982 in-depth in the images below:

Want to plan a trip to visit Epcot for yourself and live out your Walt Disney World dreams? Click here for a free, no-obligation vacation quote from the Authorized Disney Vacation Planners at Academy Travel to book the Epcot visit of a lifetime.

What do you think of Epcot today compared to when it first opened 37 years ago? Let us know in the comments!

Comments Off on Vintage Disney World: Epcot pre-opening brochures from 1982