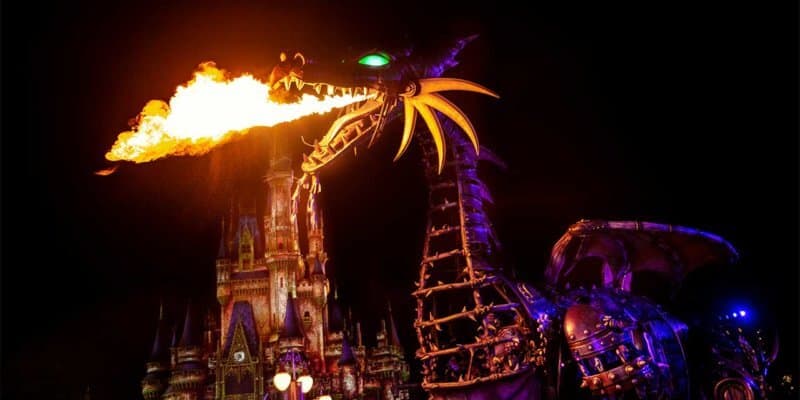 Due to its wild success and popularity among Guests this year, Disney Villains After Hours will return to Magic Kingdom in 2020, beginning February 7.

The wicked fun will take place on 24 different dates from February 7 through July 10. That’s 14 more nights of Disney Villains After Hours than Guests enjoyed this year. Though the price has increased from $139 to $145 between this year and next year, the 2020 event will be chock-full of exciting villains-themed experiences.

During Villains Unite the Night, Hades and Meg from Disney’s Hercules will take to the stage at Cinderella Castle in an exciting stage show that also features the evil and dubious Jafar, Evil Queen, Dr. Facilier from Disney’s Princess and the Frog, and Maleficent.

The steampunk Maleficent in her dragon form will break loose from her lair each night of the event. She breathes fire as she makes her way through the park—just like she does during the daytime Festival of Fantasy Parade at Magic Kingdom. But at night, in the dark, her evil grin seems more wickedly sinister.

Up for dancing the night away? Guests can head to the Forecourt stage at Cinderella Castle during the Disney Villains After Hours and shake their groove thing while a DJ spins the hottest music, making the entire area a Disney Villain-inspired club scene!

There will even be sinister surprises at some of Magic Kingdom’s attractions. When Guests ride the Pirates of the Caribbean attraction in Adventureland and the Space Mountain attraction in Tomorrowland, they will get to see new Villains-inspired additions, but we’re not ones for spoilers so you’ll have to experience them in person!

There will also be Villains-inspired beverages and food available for purchase during the event. This includes devilish desserts, dastardly drinks and evil eats to enjoy as you experience this Magic Kingdom after-hours special event.

Park hours at Magic Kingdom differ during Disney Villains After Hours, and the park will be closed to Guests who do not have a ticket for this special event. Because of this, Guests are guaranteed lower wait times in the queue for more than 25 different attractions across the six lands of the park like the Seven Dwarfs Mine Train, Buzz Lightyear’s Space Ranger Spin (defeat Emperor Zurg), the Haunted Mansion at Liberty Square, Big Thunder Mountain and more. Remember that you an get into the park as early as 7 p.m.

Note that the event does not include meet and greets with the characters who inspired the event.

Tickets go on sale today for Disney Villains After Hours.  Purchase tickets in advance for $145 each, or they can be purchased on the night of the event for $155. Annual Passholders and Disney Vacation Club Members (DVC Members) will enjoy a $30 discount on each ticket. A limited number of these special event tickets are available, so get your special event ticket now!

Want to attend Disney Villains After Hours but need help planning that magical vacation to Walt Disney World? Let Academy Travel make your experience a magical one. For information about planning your trip, visit their website.

Did you get to experience Disney Villains After Hours this year? What did you like most about the event, and what do you hope Disney will add to next year’s event? Let us know in the comments section below.