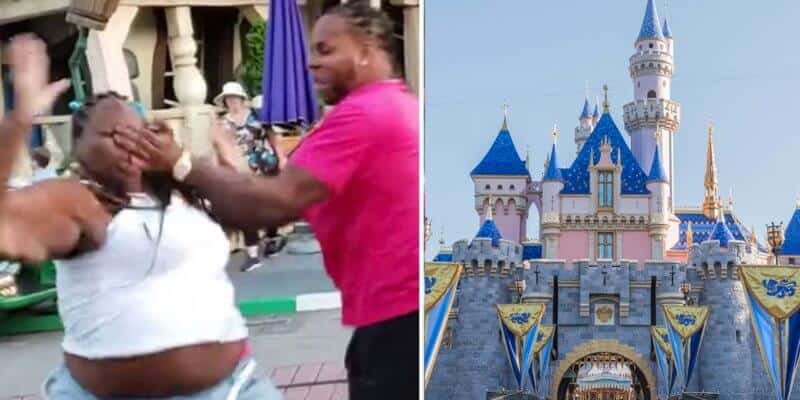 Police are now investigating a violent fight that took place over the weekend between a family at Disneyland, which has now surfaced onto social media via a viral video.

The video, posted yesterday, July 7, shows a man in a pink shirt punching a woman in the face after she spat on him during an argument in Mickey’s Toontown area of the theme park. The video shows the entire fight, which also shows dozens of bystanders closely watching as the fight unfolds.

Warning: The video does contain explicit language and violence.

After the initial blow by the man in the pink shirt to the woman who spat in his face, another man dressed in a white T-shirt stepped in, which resulted in the two men exchanging blows. This same man in white can later be seen punching a second woman in the head when she attempts to defuse the violent outbreak. After, the man dressed in pink then walks over to the first woman and begins pulling her hair and hitting her in the head.

The fight continued for a few more minutes and involved more violent blows and multiple members of the family being knocked to the ground. Eventually, a maintenance man can be seen attempting to calm the brawl and soon after security stepped in and began separating those involved in the fight.

According to KABC, Anaheim Police interviewed the family members involved in the fight. However, none of them were cooperative. Although, when the department was made aware of the video, they decided to pursue a criminal case.

In a statement to KABC, a Disney spokesperson said: “We do not condone this behavior.”

“In response to Guests’ concerns regarding the altercation at Disneyland-any type of violence is inexcusable and will not be tolerated. Those involved were immediately removed from the premises and turned over the Anaheim Police Department.”

After this article was originally published more news came to light including:

Family involved in Disneyland fight denies it ever happened then,

Defendants in Disneyland fight fail to appear in court hearing