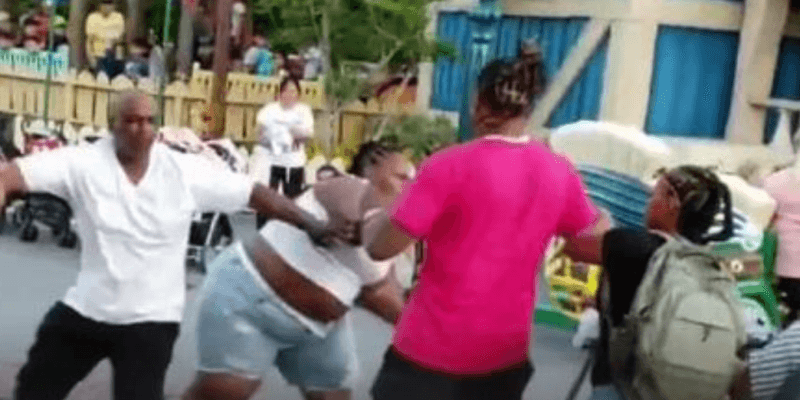 A couple facing criminal charges after their fight at Disneyland was caught on camera failed to appear in court for their arraignment this week.

The couple, Andrea Nicole Robinson and her husband Daman Petrie, were scheduled for arraignment on Monday. According to court records obtained by City News Service and reported by NBC Los Angeles, the couple did not show up for their court hearing. It’s  currently unclear how authorities will get the defendants to appear in court, but there aren’t any more hearings scheduled so far.

Although these two defendants did not appear in court this week, Robinson’s brother and the third defendant in the case Avery Desmond-Edwinn Robinson is due in court for a pretrial hearing on September 30.

The three adults are currently being charged after a fight that broke out at Mickey’s Toontown, a land in Disneyland that caters to the entertainment of toddlers and young children. The video, which went viral shortly after it was posted on July 7, shows a man punching a woman in the face after she spat on him during an argument. A bystander took the video and it shows other bystanders in the surrounding area. Currently, it’s unclear who started the fight, although one theme park guest put Avery Robinson in a chokehold and one of the children with the family was carried away from the brawl by another guest.

Police report that the family was “uncooperative” with police when authorities were called into the park after the fight took place, and the fight has been under investigation ever since it occurred back on July 5. Police report that more violence also occurred when Disneyland security asked the family to leave the theme park. Avery Robinson allegedly attempted to hit a security guard with his vehicle and threatened to kill his sister and Petrie, simulating having a gun in his hand.

Although the family involved in the brawl initially denied that it ever happened, a couple weeks after the altercation took place, the family was charged with multiple felonies.

Avery Robinson faces the most serious charges: one felony count on each of domestic battery with corporal injury, assault with force likely to produce great bodily injury on his girlfriend, and assault with a deadly weapon, as well as two counts of criminal threats. He is also charged with five counts of battery and four counts of child abuse and endangerment.

Petrie is charged with one count of battery on Avery Robinson’s girlfriend, who was punched in the face, and he faces up to six months in jail if convicted.

This is a developing story and we will update it as more information becomes available.