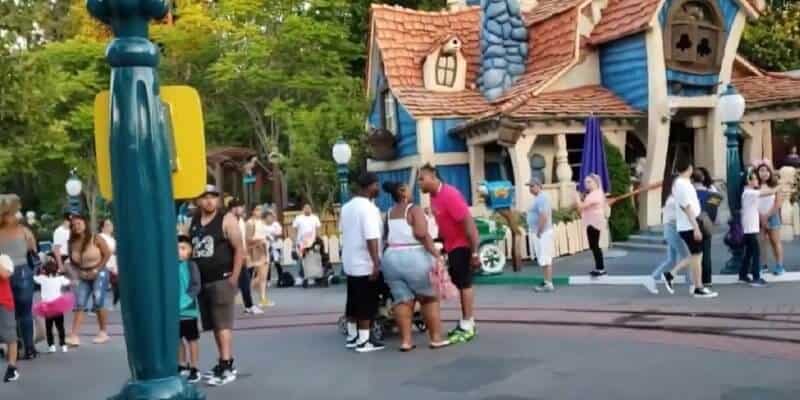 It’s only been a few days since a violent fight broke out at Disneyland’s Toontown, but even after a video of the fight went viral online, the family that was allegedly involved denies it ever happened.

Police are currently investigating a violent fight that broke out over the weekend involving a family visiting Mickey’s Toontown, a land in Disneyland that caters to the entertainment of toddlers and young children. The video went viral shortly after it was posted on July 7 and shows a man punching a woman in the face after she spat on him during an argument. The video, taken by a bystander, shows the entire fight as well as other bystanders in the surrounding area. Police report that the family was “uncooperative” with police when authorities were called into the park after the fight took place. According to Anaheim Police Sgt. Daron Wyatt, because there was no video documentation of the fight available at the time police arrived at the theme park, no arrests were immediately made. Now, the family involved is denying that the fight ever took place at all.

The Anaheim Police Department shared the recent development in the investigation on Twitter:

Not a joke. There has to be an investigation. The parties involved all denied anything occurred and we were not there to witness it. The videos that were not available at the moment make things clear and the case has been presented to prosecutors

Since the fight occurred, we have learned that all of the people involved were members of the same family, and even though there is video proof of the altercation, those involved are denying that the fight happened. This week, the Anaheim police presented the case to the Orange County District Attorney’s office for review and prosecution.

Related: Another Fight Caught on Camera at Disneyland

Yesterday, the Anaheim Police Department presented the case from Disneyland to @OCDAToddSpitzer for review and prosecution. If you are, or if you know a victim of #DomesticViolence, seek help. In Orange County, the @OCFJCFoundation can help pic.twitter.com/TzcHIkfHDL

When asked if fights like this one commonly occur at Disneyland, the police department said, “it does happen when families get together in the heat and get irritated with each other.”

Since the fight occurred this past weekend, Disneyland has issued a public statement via Twitter, sharing that any type of violence at Disneyland is “inexcusable and will not be tolerated.”

According to Fox5 San Diego, a spokesman for the Anaheim city attorney’s office shared that decision on whether to file charges in the case will come after police finish their investigation.