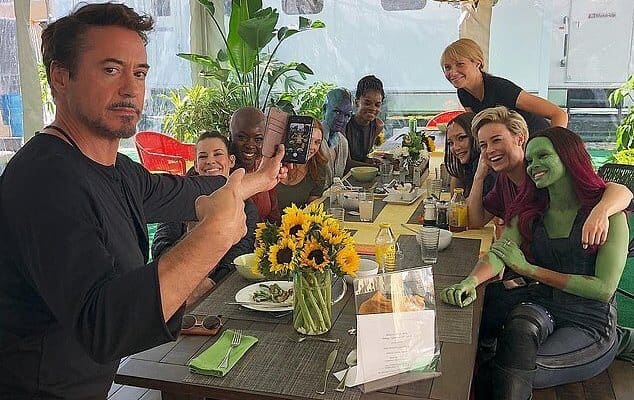 The women of Marvel got together for a special lunch on the set of “Avengers: Endgame” hosted by none other than Robert Downey Jr.

Robery Downey Jr. shared a couple of  heartfelt behind-the-scenes photos of the female members of the cast revealing that he treated them to lunch while on the set of “Avengers: Endgame.” From the pictures, we can tell that almost all the kick-butt females from the film were in attendance, including Evangeline Lily (Hope Van Dyne / Wasp), Danai Gurira (Okoye), Elizabeth Olsen (Wanda Maximoff), Karen Gillan (Nebula), Letitia Wright (Shuri), Gwyneth Paltrow (Pepper Potts), Pom Klementieff (Mantis), Brie Larson (Carol Danvers / Captain Marvel), and Zoe Saldana (Gamora). Although it’s clear from the photos Downey shared on Instagram that the lunch took place months ago before the cast wrapped filming for “Avengers: Endgame,” we’re excited that the actors are finally sharing photos from their time on set.

Take a look at the photos Iron Man himself shared of the lunch below:

#tbt #throwback #flashback to the #Women of @marvelstudios #mcu lunch I had the pleasure of hosting… #girlpower #epic #bts (? @jimmy_rich ) #TeamStark #thankyou good-times getting the ladies together…

After seeing this heartfelt memory from the “Avengers: Endgame,” set, we can’t help but reminisce about the epic moment the women of Marvel have in the film. We won’t spoil it for you, but if you haven’t seen the film in person, consider these women your reason to do so.

We know “Avengers: Endgame” is the finale to the current saga of films in the Marvel Cinematic Universe, which has been 22 films in the making. But with all of these awesome female heroes Marvel has to work with, we can’t help but get excited at the thought of more female leads in the MCU. We’ve heard that a Black Widow film and Wanda Maximoff series are both in the works, and we’re eager to learn more. But how about a Shuri and Okoye spinoff to “Black Panther,” a sequel to “Captain Marvel,” and an even bigger role for Gamora in “Guardians of the Galaxy Vol. 3”? We’re waiting, Marvel Studios, we’re waiting.

What do you think of the women of Marvel lunch that Robert Downey Jr. hosted while filming “Avengers: Endgame”? Let us know in the comments!

Comments Off on Robert Downey Jr. hosts lunch for the women of “Avengers: Endgame”