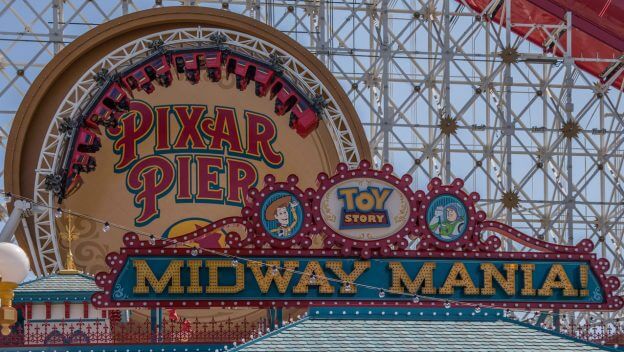 Disney California Adventure at Disneyland Resort has some Incredible new offerings for guests, thanks to the recently opened Pixar Pier. The new land, themed to all of your favorite Disney-Pixar characters, features four themed neighborhoods including the playful Toy Story Boardwalk.

Guests visiting Toy Story Boardwalk will find two delicious dining options. Poultry Palace, inspired by the Pixar short “Toy Story Toon: Small Fry,” serves up delicious chicken drumsticks, turkey legs and corn on the cob. And if you’re in the mood for something sweeter, you can visit Señor Buzz Churros, where Buzz has been switched into his Spanish mode and is serving up those cinnamon-sugar sweets.

Of course, guests can also meet their favorite characters from the Toy Story films, including Woody, Buzz and Jessie.

And we can’t forget the main attraction. Toy Story Midway Mania! shrinks guests down to the size of a toy for an exciting 4D adventure. This attraction is a must-do for the whole family. And in 2019, Toy Story Boardwalk will see the addition of Jessie’s Critter Crawl, another family-friendly attraction.

Toy Story Boardwalk is joined by Incredibles Park, Pixar Promenade and Inside Out Headquarters (set to open in 2019), to make up the four neighborhoods of Pixar Pier. Other attractions in the land include the Pixar Pal-A-Round, Game of Pixar Pier, Lamplight Lounge, Bing Bong’s Sweet Stuff, Adorable Snowman Frosted Treats and, when Inside Out Headquarters opens, the Emotional Whirlwind.

Comments Off on VIDEO: Explore Toy Story Boardwalk in a new video tour of Pixar Pier at Disney California Adventure