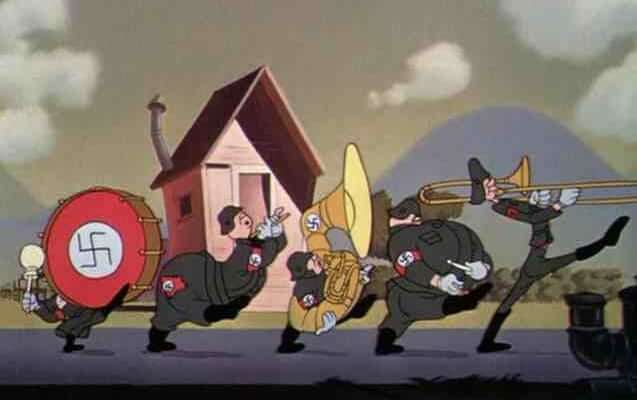 From political commentary to mustering morale, the animation industry grew during the Second World War. During a time when almost every industry was tasked with supporting the war effort to stop the Axis powers from dominating the planet, cartoons went from entertaining the young to educating adults. In this three-part series, Inside the Magic takes a look back at some of these works of art and the artists who created them during this Golden Age of Animation. In this final chapter:  Walt Disney’s contributions to the war effort. 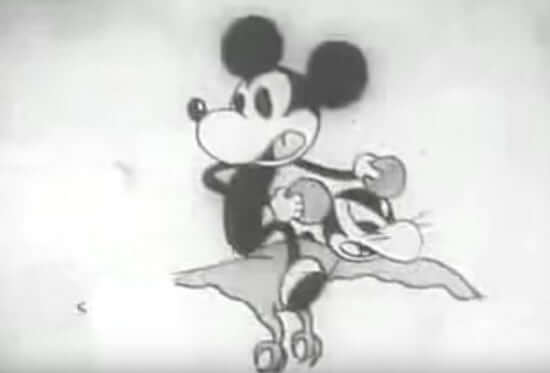 Not all of the Disney-related propaganda produced for the “war to end all wars” was authorized by the Walt Disney Company. In 1934, Japanese artists used Mickey Mouse to show the evils of American imperialism. The cartoon is believed to be set in 1936 to mark the end of a Japanese-American naval treaty.

Walt Disney and his animators provided numerous training films for both the United States and the Canadian military. In total, Disney’s animators produced over 68 hours of instructional films for the cause, providing material for all branches of the armed forces. In addition to instructional films, Disney also crafted several propaganda pieces at the request of the U.S. Government.  In fact, Disney was contracted to produce 32 propaganda films for the Government–a deal that saved the company from bankruptcy at the time. One such example is the chilling anti-German animation in the 1943 “Education for Death – The Making of a Nazi.” In this piece, a young boy is brainwashed into the German war machine. The short is based on the Gregor Zimmer book and was adapted/written by Joe Grant, directed by Clyde Geronimi, and narrated by Art Smith with music by Oliver Wallace. 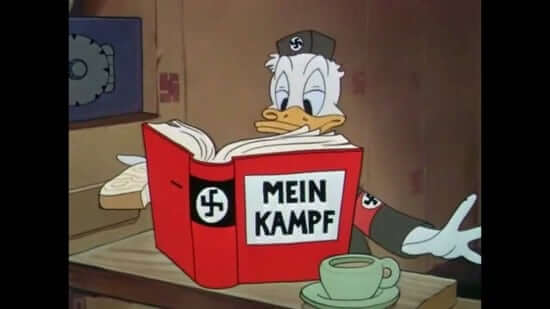 Perhaps the most popular propaganda piece produced, “Der Fuehrer’s Face,” owes its fame to Oliver Wallace.  Wallace wrote the title tune which hit number three on the music charts thanks to the Spike Jones and the City Slickers recording.  Initially intended to induce sales of War Bonds, this Donald Duck feature was originally going to be called “Donald Duck in Nutzi Land.”  Directed by Jack Kinney, written by Joe Grant and Dick Hummer, and animated by Bob Carlson, Les Clark, Bill Justice, Mitt Neil, Charles Nichols, and John Sibley, the eight-minute cartoon went on to win an Academy Award for Best Animated Short.  In the 1943 film, Donald Duck is an over-stressed Nazi, working in a shell (bomb) factory.  Pay close attention to the marching band playing the title song – Japan’s Tojo, Germany’s Goring and Italy’s Mussolini can be seen playing instruments as they parade along.

Other WWII wonders from Walt Disney include: The Disney Treasures collection includes a series of DVDs dedicated to the WWII films from Walt and Company.  Narrated by Leonard Maltin and released in tin containers, Disney Treasures editions are highly collectible.  A limited number of “Walt Disney On the Front Lines” is available from Amazon.  And another amazing resource into the WWII support efforts by Disney is the hardcover book, “Disney During World War II: How the Walt Disney Studio Contributed to Victory in the War” (also available on Amazon). We’ve seen how the animation imaginations of Dr. Seuss, Warner Brothers, and Walt Disney added an astounding amount of support in the way of training films, entertainment, and encouragement (in the War Bond films) as well as persuasive propaganda during the Second World War.  However, the influence and effectiveness of cartoon storytelling are still used today, as evidenced by the 2012 short, “Tax the Rich: An Animated Fairy Tale.” [Written and directed by Fred Glass; animated by Mike Konopacki and narrated by Ed Asner, this 8-minute film was produced for the California Federation of Teachers]

The Golden Age of Animation, especially the WWII era, was a time when studios were tasked to muster the moral and bring the country together in support.  From Superman to Mickey Mouse, America’s animated heroes joined the effort, leaving us with a unique snapshot of cartoon culture and hours of animation as a window into this chapter of history.