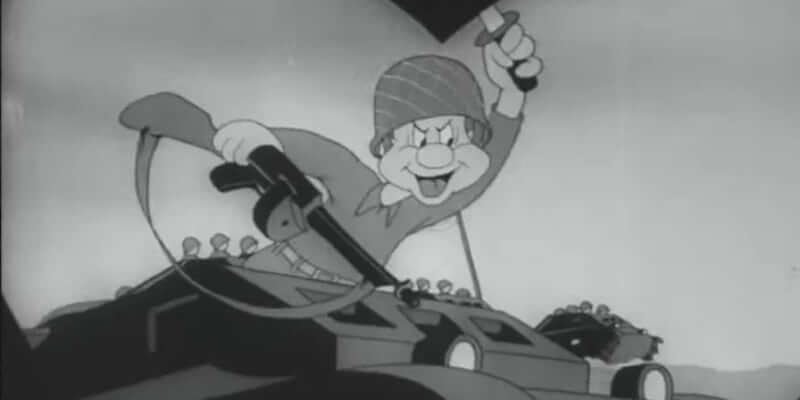 From political commentary to mustering morale, the animation industry grew during the Second World War.  In a time when almost every industry was tasked with supporting the war effort to stop the Axis powers from dominating the planet, cartoons went from entertaining the young to educating adults.  In this three part series, ITM takes a look back at some of these works of art and the artists who created them during this Golden Age of Animation.  Today, in part one, we look at Theodor Seuss Geisel’s contributions during WWII. Better known for his whimsical children’s books like “The Cat in the Hat,” “The Lorax,” “Horton Hears a Who” and “The Grinch Who Stole Christmas,” Ted Geisel (AKA Dr. Seuss) created hundreds of hand drawn frames in his effort to support the war machine.  Seuss, no stranger to writing for adults (he also wrote “mature” adult books), was featured in the New York daily newspaper: In addition to his single panel cartoons, Ted Geisel (along with Frank Capra and Mel Blanc) also wrote a series of instructional cartoons for the US Army.  At the request of Frank Capra, Chairman of the U.S. Army Air Force First Motion Picture Unit at the time, Warner Brothers–who outbid Disney for the job–was tasked with a series of instructional films for new soldiers.  Chuck Jones, Bob Clampett and Friz Freleng produced the animation to stories written by Geisel.  The result was a series of cartoons called “PRIVATE SNAFU” (SNAFU being an acronym for Situation Normal, All Fouled Up).  Private SNAFU was brought to life by the voice skills of the amazing Mel Blanc.

Disclaimer: it should be noted that certain ethnic stereotypes and representations, though common at the time of production for this media, may be considered offensive.

In this 1943 film, “Gripes,” the sounds of Seuss can be heard in many of the cartoon’s conversation:

Produced in 1944, this Private Snafu short, “Censorship,” conveys the need to keep sensitive information OUT of personal correspondence:

Other popular titles in the SNAFU series included “Going Home“ and “Booby Traps“ (with a playful, adult, the personification of the concealed deadly devices).

In 2001, Seuss’ print cartoons were compiled into a book: “Dr. Seuss Goes To War: The World War II Editorial Cartoons of Theodor Seuss Giesel.”  The book is available on Amazon (click here). Our series on the WWII Golden Age of Animation continues tomorrow, featuring Warner Brother’s “Loony Tunes” during the war.