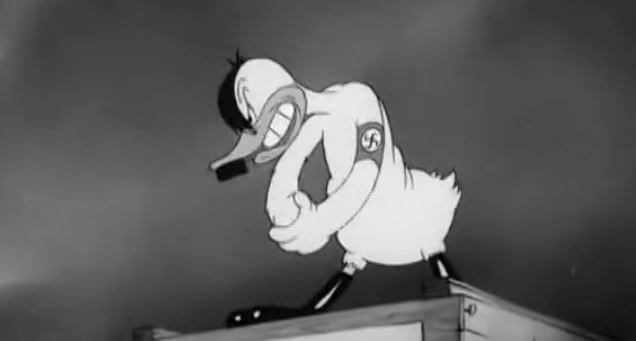 From political commentary to mustering morale, the animation industry grew during the Second World War.  During a time when almost every industry was tasked with supporting the war effort to stop the Axis powers from dominating the planet, cartoons went from entertaining the young to educating adults. In this three-part series; Inside the Magic takes a look back at some of these works of art and the artists who created them during this Golden Age of Animation. In part two we take a look into the Warner Brothers Studio’s role in these wartime films.

World War II was truly a global experience, affecting almost every aspect of life. From rationing to deplorable internment camps, Americans at home did not escape the war’s global grasp.  To help boost morale (and raise funds, in the form of war bonds), animation played a major role in the effort.  Heroes from Superman to Popeye offered escapism and encouragement as their stories turned toward the times of war. Bugs Bunny, Daffy Duck and the Merrie Melodies/Loony Tunes* gang joined in the parade with clips ranging from ridiculing the enemy with satire and absurd (some might say offensive) illustrations of Axis leaders and citizens to depicting key characters antagonizing and overcoming the enemy.  *Merrie Melodies was the Looney Tunes answer to Walt Disney’s Silly Symphonies and featured music from other Warner Brothers films. In November of 1943, Daffy Duck matched wits with the Third Reich in “Daffy the Commando” which was directed by Friz Freleng, written by Michael Maltese and animated by Ken Champin.  Audio credit goes to Carl Stalling for music and Mel Blanc for voices.  The subtle humor in this Looney Tunes feature is well crafted.  One scene shows a telegraph from “the Apes of Wrath” and includes all three Axis leaders (except Mossolini crossed out).

Racial stereotypes were a common element in war-time entertainment. In April of 1944, Bugs Bunny took on the Japanese in a Friz Freleng cartoon entitled “Bugs Bunny Nips the Nips.” The term “nips,” referring to a common slur of the time, was short for Nippon (another name for Japan).  Classic Carl Stalling music and the voice talents of Mel Blanc ensure that the Merrie Melodies signature sound is stamped on the short (story by Tedd Pierce, animation drawn by Gerry Chiniquy).  Of note, the once accepted stereotypes depicted in the film fell out favor not long after the war ended and was one of a dozen titles that were deemed “too offensive” and pulled from television rotation in later years.

Many of the Warner Brother’s Looney Tunes and Merrie Melodies World War II cartoons can be found on YouTube and on the 1998 VHS release “Bugs and Daffy: The Wartime Cartoons” (limited copies can be found on Amazon or Ebay). “Toon” in tomorrow for the final chapter in our Golden Age of  Cartoons collection.  We’ll take a peek at Walt Disney’s World War II films.