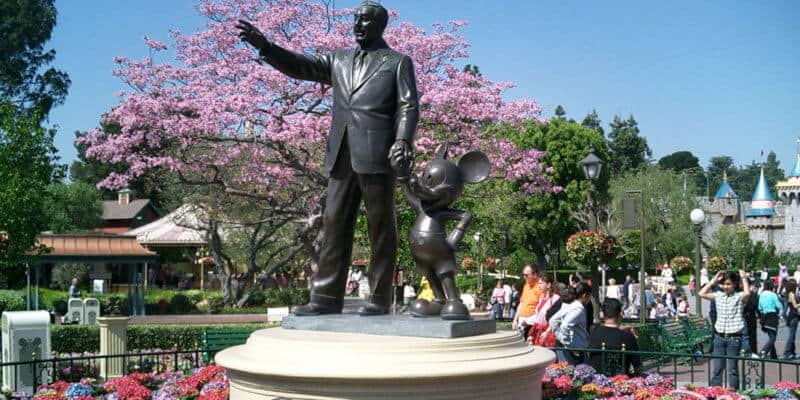 The Disneyland Resort is making preparations to welcome back Guests and Cast Members. We’ve seen updates about new health and safety measures, like plexiglass and social distancing markers throughout the theme park, to new attraction updates and refurbishments, like the newly remodeled Snow White’s Enchanted Wish. One thing is for sure, Disneyland will look different than the theme park we’re used to seeing. Nonetheless, there are some iconic Disneyland staples that just need some sprucing up before the reopening.

Related: Walt Disney Is Actually Talking to Mickey In the Partners Statue

One of these Disneyland icons is the famous Partners statue that sits in the epicenter of the theme park’s  Central Plaza. This great piece of history — and excellent photo opportunity — stands at the end of Main Street, U.S.A, just steps away from the dreamy Sleeping Beauty Castle. Featuring Walt Disney and Mickey Mouse, this beloved statue also displays this famous Walt Disney quote, “I think most of all what Disneyland to be is a place…where parents and children can have fun together”.

This bronze statue of Walt Disney and Mickey Mouse is a worldwide Disney icon and is even located in multiple parks. The D23 Official Disney Fan Club describes the statue as follows:

Bronze statue of Walt Disney and Mickey Mouse installed in the hub at Disneyland park on November 18, 1993, to commemorate the 65th birthday of Mickey Mouse. Master Disney sculptor Blaine Gibson came out of retirement to create the sculpture. Identical statues were installed at Magic Kingdom Park at Walt Disney World on June 19, 1995, at Tokyo Disneyland on April 15, 1998, at Walt Disney Studios Paris on July 19, 2002, and at the Disney Studio in Burbank on February 10, 2003.

Now, as the Disneyland Resort is about to undergo a major reopening, Cast Members are getting everything in order around the Disneyland Partners statue- mainly the flora surrounding it. Disney Parks took to TikTok to show how they are “Rooting for reopening!”

We can’t wait to see what’s blooming at Disneyland when it reopens on April 30, 2021!

Have you ever taken your photo by the Disneyland Partners statue? Let us know in the comments!

Are you ready to return to the Happiest Place on Earth? Let Academy Travel help with your vacation planning!

Comments Off on Disneyland Prepares Iconic ‘Partners’ Statue For Reopening