Avast ye landlubbers, there be new adventures ahead at Walt Disney World. Today the Disney Parks Blog confirmed long-standing rumors of an elaborate game being installed into Adventureland at the Magic Kingdom.

The “interactive quest” is called “A Pirate’s Adventure: Treasures of the Seven Seas” and will debut in Spring 2013. A single piece of concept art has been shared, offering a glimpse at park guests happily firing cannons near the Swiss Family Treehouse while others are interacting with skulls in the background. 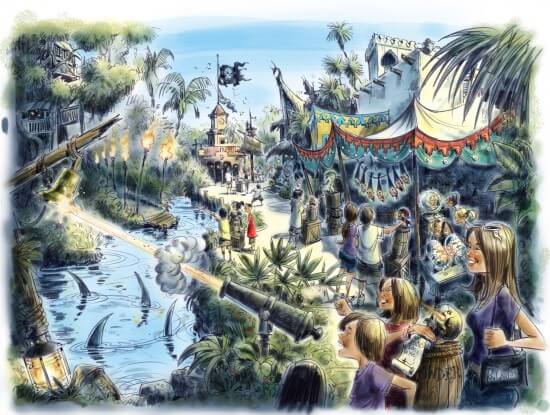 Taking a closer look, it seems those skulls are the key to activating each individual experience, whether it’s charming a snake, talking with a row of shrunken heads, or observing something mysterious across a flame-lined pathway. 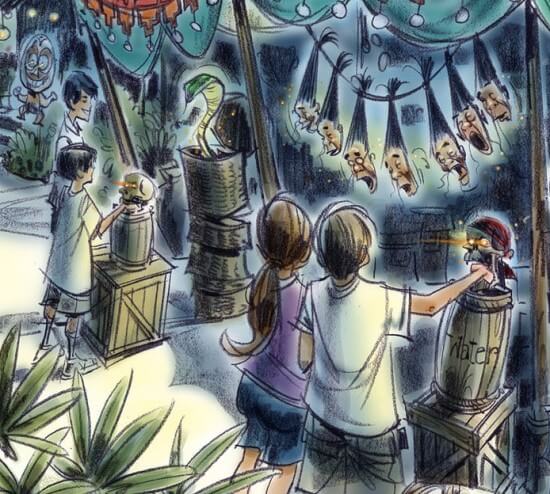 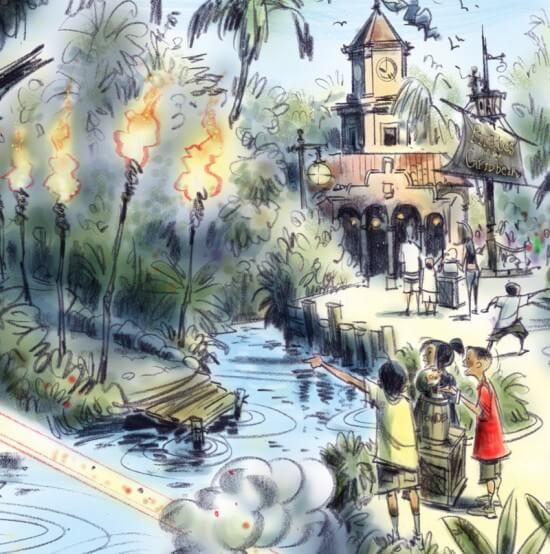 More interactive elements include a Madame Leota-style head in a crystal ball and two ships in bottles firing cannons at each other. Of course, any or none of these specific elements may ultimately make it into A Pirate’s Adventure, seen here only as concepts.

Related: #DisneyMagicMoments: ‘Talk Like a Pirate Day’ on Pirates of the Caribbean

The experience will be included with park admission and won’t require the use of cards like Sorcerers of the Magic Kingdom, instead of utilizing a pirate map and “magic talisman” to assist Captain Jack Sparrow throughout five quests scattered in the land, with a goal of finding treasure and fighting baddies including Captain Barbossa and the Royal Navy.

Elements of the game have been slowly installed in the Magic Kingdom over the past few months, continuing until its upcoming debut. But neither the Pirates of the Caribbean attraction nor any other Adventureland locations will be closed during installation, as Imagineers work their magic in and around existing areas.