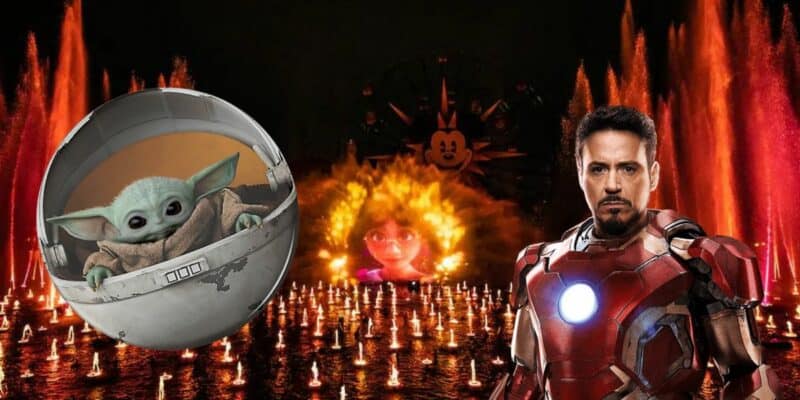 When most guests think of Disney’s Nighttime Spectaculars, images of fireworks, laser light shows, water projections, and famous Disney characters are the first that come to mind. The shows are designed to cap off a day at the Parks with a grand finale of Disney magic, but their most recent creation has truly demonstrated how far the company has come since the days of Mickey and Minnie.

“World of Color: One” is the newest Nighttime Spectacular to hit the Parks, and it’s been lighting up the night skies with more than just a few dazzling fireworks. Like similar shows before it, the spectacular features of grand display of pyrotechnics, water, colored lights, and projections of famous characters under the Disney brand.

However, what separates the show from others of its breed is the wide variety of famous faces that appear over the course of the performance. While it’s not unusual to see characters like the princesses and classic characters from the studio’s heyday, the massive amount of Disney’s other IP it uses is what separates “One’s” flavor from the others.

Several other Disney Parks shows utilize scenes from movies like The Lion King, Coco, and Encanto, but seeing them paired with scenes from Marvel and Star Wars is truly a phenomenal crossover event. It’s always fun to see Disney characters share the space with other Disney characters, but to see Simba in the same show as Grogu and Doctor Strange is truly something fans are going to be talking about on their way back to the hotel room. Currently, the show has scenes from the previously mentioned Disney animated masterpieces, as well as scenes from The Mandalorian, The Avengers, Endgame, and even more. Not since the Infinity Saga have Disney fans been so enraptured.

Although this might appear to be a flex of Disney’s various properties in influence, it is one of the biggest helpings of fan service the imagineers could have concocted. Perhaps this is but a small taste of other projects to come and celebration of the company’s 100th anniversary. Either way, fans across the board are definitely going to be looking forward to this incredible display of variety from the house of mouse.

Who are you hoping to see in “One?” Tell us in the comments below!