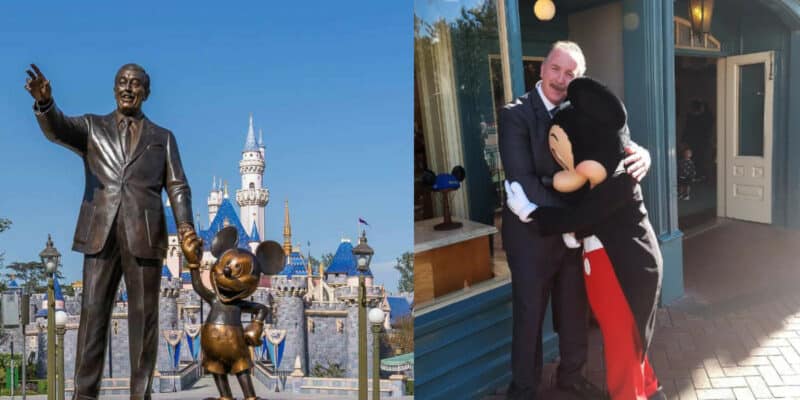 There’s even more to Walt appearing at Dapper Day than fans thought!

In November of 2022, an annual tradition returned to Disneyland. Dapper Day, a fan-organized event, sees large groups of Park Goers dressed to the nines, often in vintage attire, visiting both the Disneyland Resort, as well as Walt Disney World. While it’s fun to see Guests clothed as they might have been at the opening of the Parks, it’s not often that people get to see Walt Disney himself return to the parks, which is just what happened last year.

In pictures and videos that swept social media, cosplayer Bill Burns, dressed as Walt Disney, walked the Park and had a touching interaction with Mickey Mouse right on Main Street, U.S.A. Fans across the world were stunned not only at the incredible likeness Burns was able to portray but to see once again, in living color, the man behind the Mouse.

What many fans and Guests didn’t realize was the impressive story that goes along with Burns and his portrayal of Walt. In an interview with Good Morning America, Burns discussed the interaction in depth. He talked about being pulled aside by the Cast Members in charge of the meet-and-greet line and getting to have that special moment with Mickey.

“Mickey stops and literally is staring, and I literally almost [waved my hand in front of his face], and then Mickey snapped out of it, and then you saw the hug, and that hug was a long hug as hugs go for the characters. It was extremely genuine. That Cast Member was stunned. We found out later that…some of the Cast Members backstage were saying, ‘Walt is in the Park.’”

In addition to giving Cast Members and more than a few Guests at the Magic Kingdom an experience they’ll never forget, the outing was particularly poignant for Bill Burns as well. In the interview, Burns discloses that he had recently overcome a bout with cancer. He discusses that he made a goal during his treatment, that if he made it through, he’d endeavor to use his cosplay to inspire people.

Burns went on to pay tribute to Chadwick Boseman from Black Panther (2018), citing how the actor had filmed much of his work in the Marvel Cinematic Universe while having cancer himself and how inspirational that was to him:

“That made a huge impact on me because that’s what I want to do. I’m hoping I can just do a fraction of what he did…I had a woman say, ‘I was a little girl when I met Walt…I held his hands just like I’m holding yours.’ She was in tears…I was elated to give so much back to people. The best day ever in the Theme Park.”

Burns has certainly given Disney fans a lot this year with his portrayal of beloved founder, Walt Disney. While he hasn’t said if he’ll be back to do it again next time, this last appearance marked his third outing as Walt, so there’s a good chance more Guests could see him this year at Dapper Day!

What do you think about Bill Burns’ inspiring story? Let us know in the comments below!