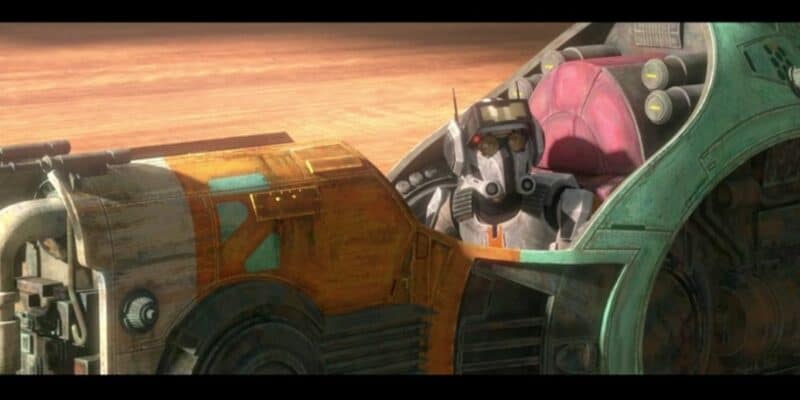 Clone Force 99’s latest adventure will be nostalgic for Prequel fans this week with a new risky form of Podracing.

This week’s episode focuses on Tech, Wrecker (both voiced by Dee Bradley Baker), Omega (Michelle Ang), and Cid (Rhea Perlman) as they try to win a race of Riot Racing. The episode begins with Hunter and Echo away on a small mission. Omega and Wrecker are betting cartons of Ord Mantell Mix, their favorite snack while playing Djaric.

Cid arrives and explains that she has a new mission for them. The crew is confused as they mainly do their missions when all of them are present, but the Trandoshan boss reassures them that the task is simple and easy as she just needs them to be “muscle” in her security team.

This leads to the crew arriving at the race tracks to see several race speeders fly by. Blaster fire ensues, and shields activate. The deadly race continues. Omega and the crew are in awe, and Cid reveals that she has a new racer set to make her a lot of money. A droid by the name of Tay-O (voiced by Ben Schwarz) wins the race and is revealed to be working for Cid.

The crew meets the overly confident droid when a new gang appears. Millegi and his escort ask Cid if they want to strike a deal and see who has the faster pilot. Whoever wins the race will pay the “standard” bet to the other side. Cid agrees, and Millegi leaves with a grin.

Clone Force 99 acknowledges that Millegi looks like bad news, so they keep helping Cid by repairing the speeder. Tay-O is ready to race. Cid warns the droid not to take the left tunnel — Cid calls it a deathtrap — and the droid ends up boxed in by two speeders. The front pilot — Millegi’s racer — pulls out a saw while the back racer uses clamps to hold the speeder.

Tay-O and his speeder get badly damaged and crash right before the finish line. Millegi wins.  Cid and Clone Force 99 check the wreckage and salvage what they can. They grab the scattered parts of Tay-O and the speeder when the Millegi arrives, demanding payment.

Cid says she will pay him back later, which angers the boss, who demands to get paid. Omega steps in and says they will do another race with new terms. If Millegi wins, they will pay double. If Cid wins, she can walk away debt free. Millegi accepts and takes Cid as collateral to ensure the crew holds their end of the deal.

Omega and the clones talk about Cid’s predicament, and Tech points out that this is one of many instances where Cid has required help from them due to her “problematic” cycle. Clone Force 99 begins working on the speeder and Tay-O, and right when everything is set, a speeder crashes into Tay-O breaking him all apart.

The next race was just about to happen, and Millegi appeared a few seconds later, stating that the crew might as well pay up since they didn’t have anyone who would race. Tech says he will pilot the speeder, and the race is back on.

Earlier, Tech argued with Tay-O that he should place more energy into the shields instead of weapons to increase his defenses and maneuverability. Tay-O didn’t take the clone seriously, but now Tech was the racer, and his way of doing things was going to be different.

The race begins, and Tech starts in last place for the first couple of laps. He doesn’t fire into other racers but diverts all power to the shields. As opponents fire shots from their rear, Tech is protected and doesn’t suffer the consequences from other bombs or traps from other racers ahead. Soon enough, the clone realizes he can go faster if he drops off his weapon section of the speeder, so he leaves it behind and begins to race forward.

Tech flies by several opponents until he reaches the front. He sees the three tunnels and looks at the schematics, and decides that he is going to risk it and take the left tunnel. Tech survives as he uses speed to overcome the gaping hole most speeders fall into.

Then Tech is boxed in like Tay-O was but used the trap against his opponents to make Millegi’s racer crash and steal first place. The crew goes to recover Cid, and Millegi tells them they should watch their backs. Cid isn’t a person they should trust. Clone Force 99 walks away, thinking about Millegi’s warning.

Things to take away from Episode 4 of Season 2:

“Faster” might have been nostalgic to fans who loved the podracing scene as Filoni stole several elements from Star Wars: Episode I — The Phantom Menace (1999)’s podracing on Tatooine. Besides that, the episode was more of a fun moment in Star Wars and highlighted that Cid’s questionable past might end up being a problem for Clone Force 99. Time will tell if they continue to work for Cid or not.

What were your thoughts on Episode 4? Let us know what you think!