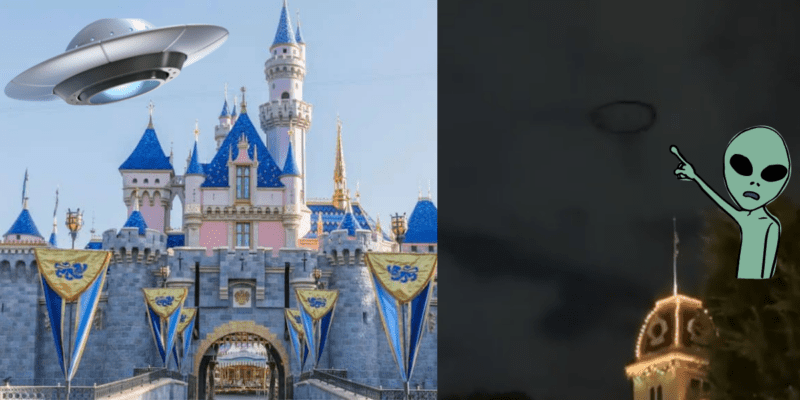 Do UFOs actually exist? Some Disneyland Guests thought they might have seen confirmation late last night.

The Walt Disney Company and its Disney Parks division have a fantastic reputation for providing best-in-class entertainment and nighttime spectaculars. From broadway like performances to wonderful firework displays, Disneyland and Walt Disney World Resort don’t spare any expense.

For thousands of fans, a visit to their favorite Disney Park has to end with enjoying one of the breathtaking nighttime spectaculars. Whether you’re at Disneyland Resort, Walt Disney World Resort, Disneyland Paris, Hong Kong Disneyland, Tokyo Disney Resort, or Shanghai Disney Resort, enjoying the fireworks, projections, water and fire effects, and heart-stirring music is a must-do for the young and the young at heart when visiting Disney Parks worldwide.

To ensure that these nighttime spectaculars are run to perfection, there are sometimes test runs involved to fix any bugs that may occur before it’s officially introduced to the general public. Some of these shows could also use unique props, such as drones, to display the fantastic images we see from Disney. Lastly, the smoke left by all those fireworks and special lighting could leave optical illusions that could recreate an image that may look like something not actually there.

These could be explanations for a mysterious image spotted last night by Guests enjoying their late evening at Disneyland. Late last night, many Disneyland Guests in Anaheim, California, took to Twitter to take a picture of what some thought to be a potential UFO. Here are some of the tweets we saw on social media.

Is this a #UFO sighting at #disneyland? #ufosighting

Seen tonight around midnight at the top of the Disneyland parking lot in Anaheim, CA! Much lower and closer to us than video shows. Anyone know what’s going on? So cool!
@coasttocoastam #ufo

Seen tonight around midnight at the top of the Disneyland parking lot in Anaheim, CA! Much lower and closer to us than video shows. Anyone know what’s going on? So cool! @coasttocoastam #ufo pic.twitter.com/ytcMSmYvQK

Images like these have been spotted at Disneyland Resort in the past, however. The Walt Disney Company, Disney Parks, and Disneyland Resort have not provided any official explanation as to what the image was. Still, we can speculate that it probably was not a UFO and something easily explainable.

What do you think the mysterious images above Disneyland Resort are? Let us know what you think by leaving us a comment below.