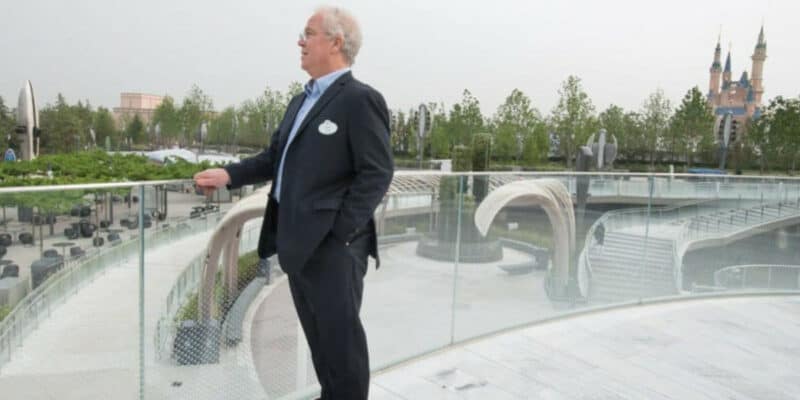 Founded as WED Enterprises back in 1952, Walt Disney Imagineering has been a staple of Disney Theme Parks since the very start. The headquarters in Glendale, California, was a playground to Walt, and he visited there often, not necessarily to check in, but to play, enjoy, and see what new things the Imagineers had been able to come up with. Now, one such Imagineer is back in the news!

Bob Weis joined Disney Imagineering in 1980 during the transition from Donn Tatum to Ron W. Miller as CEO of the Walt Disney Company. During his tenure, Weis was instrumental in bringing about many areas and attractions known around the world today. Included on his long list of Imagineering accomplishments are Disney Park Tokyo Disneyland, the recent remodel of Disney’s California Adventure, and the design of Shanghai Disney Resort!

After decades of outstanding work, including becoming president of Walt Disney Imagineering, as well as Global Imagineering Ambassador, Weis announced his retirement in October of last year, and it didn’t come as much of a surprise. After a 42-year-long career, with plenty to be proud of, he had earned a well-deserved rest…or so it seemed!

Just this week, the design firm Gensler announced that Bob Weis was coming out of retirement to work for their organization as Global Immersive Experience Design Leader. With a track record like his, it’s no surprise that the firm went after the former head of Walt Disney Imagineering.

Former President of Walt Disney Imagineering Bob Weis is joining Gensler as Global Immersive Experience Design Leader! Learn more about his new role and his viewpoint on immersive experiences – and why they are more important now than ever before.

Former President of Walt Disney Imagineering Bob Weis is joining Gensler as Global Immersive Experience Design Leader! Learn more about his new role and his viewpoint on immersive experiences – and why they are more important now than ever before. https://t.co/oJ3p2gKnyE

Gensler, who has worked with Disney before, will offer Weis the opportunity to bring his expertise in design, storytelling, and immersive world-building to a broader audience. What is more surprising is Weis’s decision to come out of retirement for the job. At 75 years old, with a full and fulfilling career behind him for one of the most creative companies on earth, the reasons must be very compelling.

According to an interview on Gensler’s website, Weis cited the opportunity to apply his experience at Disney to the world at large:

“Gensler’s commitment to leading the future of design is perfectly aligned with my passion for developing unique, immersive experiences with a diversity of creative voices. Now, I get to take my passion, expand it, and inject experiences into projects all over the world that will reach people in their everyday lives.”

Where the firm has worked with Disney in the past, it’s not a stretch to imagine that Weis may well be treading on Disney soil once again, bringing his talents to Magic Kingdom’s across the globe.

What do you think of Weis’s new position? Let us know in the comments below!