Could More Trains Be Running at Disneyland Soon? - Inside the Magic 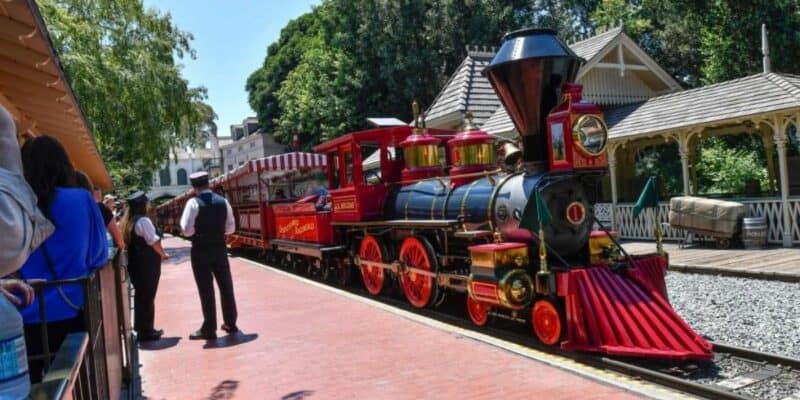 The Disneyland Railroad is a special part of the Disneyland Resort, not just because the trains transport Guests to the different areas of the Park, but because Walt Disney himself had a passion for trains as well.

The trains also continue the art of storytelling around the Park as Guests view the Rivers of America and landscapes based on the Mississippi, Columbia, Missouri, and Rio Grande rivers, along with rock formations, waterfalls, and wildlife.

In addition, between the Tomorrowland and Main Street, U.S.A. stops on the Railroad, Guests can find dioramas of the Grand Canyon and Primeval World – Land of the Dinosaurs with Audio-Animatronic dinosaurs.

Reddit user bigredengr explained that the E.P. Ripley was running at Disneyland after closing:

It happened so fast that I couldn’t get a picture…but they were testing the E.P. Ripley (Engine 2) on the railroad tracks after close tonight. It’s been in refurbishment since the parks reopened.

For history folks, Engine 2 was the engine Walt steamed in on opening day and one of 2 engines custom-built by WED in 1954 (along with the C.K. Holliday, Engine 1). Looking forward to seeing it soon during park hours.

Related: Disney Working on Repairs After Building Catches on Fire

User Jir0nimous confirmed that this was happening:

Can confirm. As a 3rd shifter, I seen them running it quite a bit through the night.

Other commenters, such as user TheOnlyBongo, shared the original poster’s excitement for the potential reopening of this train at Disneyland:

It’s about time. Like really this is a happy location but management’s mistreatment of one of their core transportation engines for so many years, if not close to a decade, is kind of embarrassing. So much finger pointing and deliberation of doing anything (Supposedly EP Ripley was shoved to the back of the roundhouse in a broken state for many many years) that I am glad it finally happened but damn…just took forever to do.

Additionally, the original poster shared this in response to someone who said their excitement of seeing the train run is infectious to other fans:

Thanks. There are so many things that make Disneyland special to all of us. A lot of folks talk about how Walt and the Imagineers put a lot of effort into elements of the park that no one would notice because it made the experience richer.

I felt very optimistic leaving the park tonight. Seeing Walt’s favorite train back after so many years…I just remembered that it hasn’t been on the rails during park hours since they rerouted for Galaxy’s Edge…and thinking about how much time and money Disney spent to get it back in shape is what keeps me coming back. They didn’t have to do that…but they did.

There are currently five trains at the Park, which include C.K. Holliday, E.P. Ripley, Ernest Marsh, Fred Gurley, and Ward Kimball. All were named after American icons in the locomotive industry, except Ward Kimball, who was a Disney animator that inspired Walt’s love of trains.

Have you ever ridden the trains at Disneyland? What was your experience like?