Disney Park Overtaken By Massive, Hectic Crowds - Inside the Magic 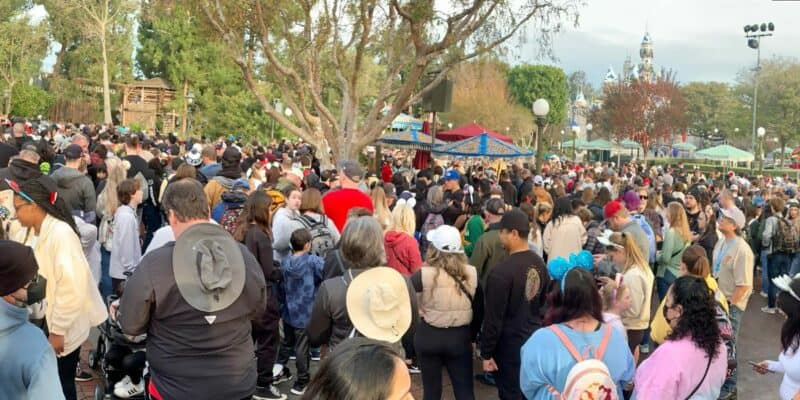 Disneyland is home to many iconic attractions, including the Haunted Mansion, Guardians of the Galaxy – Mission: BREAKOUT, and the soon-to-be-defunct Splash mountain, all of which are located in one of two of Disneyland’s world-class theme parks, Disneyland Park and Disney California Adventure.

Even though the Christmas season is winding down, the Disney Parks and Resorts are still busting at the seams with Guests eager to spend their holiday vacations at “The Happiest Place on Earth.”

One Guest shared a jaw-dropping photo of Disneyland recently, showing just how crowded the Resort is. Check out the photo down below:

The threat of rain has had no effect

The threat of rain has had no effect from Disneyland

As you can see, thousands of Guests lined up for “rope drop” at the Resort, trying to enjoy the last few days of the Christmas season. It was supposed to rain at the Southern California Resort, but as you can see in the photo, the threat of rain did not seem to deter anyone.

This photo was taken around the same time that Disney Genie+ completely sold out at the Disneyland Resort three days in a row.

Things are just as busy at Walt Disney World, with thousands of Guests standing shoulder to shoulder at Magic Kingdom during the Park’s nightly fireworks. The entire Resort hit its maximum capacity recently as well, with no more reservations being given out until 2023.

Once Walt Disney World and Disneyland reopened to Guests after temporarily closing due to the ongoing pandemic, the theme parks implemented a new reservation system to help monitor Park capacity called the Park Pass system. In order to enter a theme park at Walt Disney World or Disneyland, Guests must not only have valid Park admission but a valid Park Pass reservation.

If you’re visiting Walt Disney World over the next couple of weeks, be prepared for insane crowds and for there to be major wait times. We ask that you please remember to be courteous to others and be patient, especially with Disney Cast Members who are working during this time.

Are you visiting Disney anytime soon?