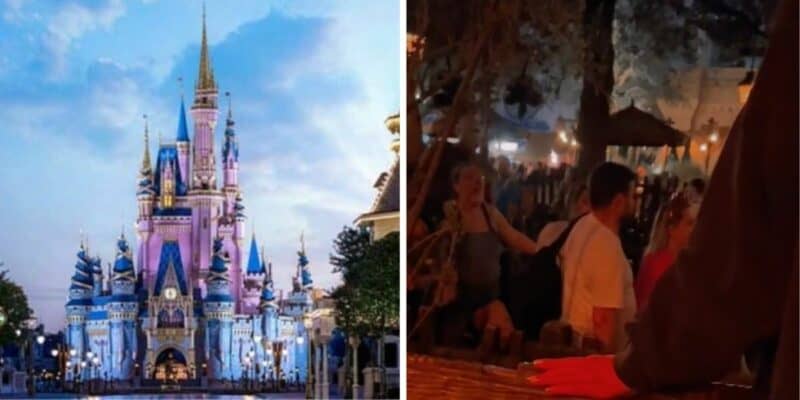 Things were not very magical at Walt Disney World recently.

When Guests go to Walt Disney World, they must always recognize that there are rules and regulations that must be abided by, such as waiting in line for attractions. Walt Disney World and Disneyland both offer many rides, restaurants, shows, and attractions at the Resorts.

However, common courtesy is also just as important.

Walt Disney World offers many rides, restaurants, shows, and attractions at the four Parks. At times, the selection can be overwhelming, which may cause stress for some Guests, especially when lines are long.

Wait times can end up being hours long for attractions like Seven Dwarfs Mine Train or Peter Pan’s Flight, but if a Guest chooses to enter the queue, they will have to wait in the order in which they entered.

Because of these long lines, along with the harsh temperatures and overall business of the Disney Parks, tensions can run extraordinarily high sometimes, resulting in incidents between Guests.

One Guest happened to capture a nasty fight between Guests at Walt Disney World recently. The video shows multiple people yelling and screaming at each other while in line for Seven Dwarves Mine Train, an incredibly popular attraction at Disney World’s Magic Kingdom. You can check out the full video in our original story by clicking here.

The video appears to show a Guest attempting to get reunited with their family after they were already in line. This is a very controversial thing not just in the Disney Parks community but the theme park community in general and something we have reported on extensively.

The Guest claims that they left the line as they needed to use the bathroom. Upon re-entering, Guests would not let her attempt to get back with her family. Eventually, the woman hops the fence and gets back to where her family’s spot in line, but only after a large argument unfolds in front of hundreds of Guests.

Of course, Guests should never intentionally “cut in line,” but this is now what happened in the video. Sometimes life just happens, and it’s just as important for Guests to be curious and understanding of others as it is for them to follow the rules placed by Disney.

Guests reacted to the video in a lot of different ways. Deb, one of our readers, responded to our original story saying, “Absolutely fine, I have no problems with one person or parent and child taking a toilet break, it’s gonna alter my wait time by what, a few moments.”

Joe, another reader, agreed, saying, “People have nothing better to do than be ignorant. One person who has been online for an hour and cant hold it is not a big deal. The reason for the rule is because one parent would stand on line their family of 6 rode other rides and then would jump in. Lets all start acting reasonable. I am all for not allowing large groups or even more than 2 adults (a parent not want to allow their teenager to go to bathroom by themselves) but lets use common sense.”

The general consensus was that leaving the line to use the bathroom was fine, just as long as it’s not more than half a dozen Guests leaving or re-entering at the same time.

Have you ever witnessed a situation like this one at Walt Disney World?