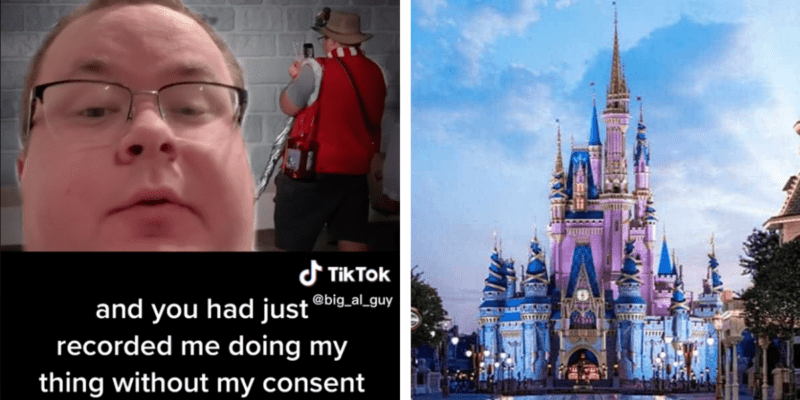 Over the past year, we’ve reported many controversies surrounding Disney Parks influencers. Disneyland Resort fans petitioned to get one couple banned from the Park after allegedly visiting while sick. Another influencer went viral for wearing a full-length ball gown to Disneyland Park and being asked to change due to a “security issue.”

Disney influencers have popped up over the last decade as social media has become more interwoven with our everyday lives. Hundreds of Disney social media personalities make a living sharing their love for Disney Parks and The Walt Disney Company.

Last week, TikTok user @big_al_guy responded to JoJo (@JoJocrichton), a Disney influencer with nearly 800,000 followers that was upset about an impersonator using his content without consent:

#stitch with @jojocrichton #greenscreen by no means am I criticizing people whose livelihood is digital content creation, but I am asking for a bit of common sense and respect for other people’s privacy (especially when it concerns folks who are not part of any creator community/ have no realation to you).

“It really stinks that people are using your content for their own gain and their own profit without your consent,” the TikToker replied. He then shared a screenshot from one of JoJo’s YouTube videos in which he was filmed at Walt Disney World Resort without consent.

“You had just recorded me doing my thing without my consent, without my permission, which really, you know, I really am not a big-time creator. I don’t get monetization or anything like that,” he explained. “I really was gonna let it go, but then seeing this video made me think. You know, if JoJo really is as upset as he says he is about people doing things without permission… then he needs to reevaluate what it means to have permission from other people.”

The TikToker explained that it was unfair for JoJo to be upset about being used by others when he films unknowing Guests to make money in his own videos.

“You’re fine when it doesn’t affect you, but when it affects your bottom line, then you get upset about it,” he concluded.

Do you think stricter rules should be implemented for Disney influencers and live streamers?