Cast Members Share Ghost Encounters at Disney - Inside the Magic 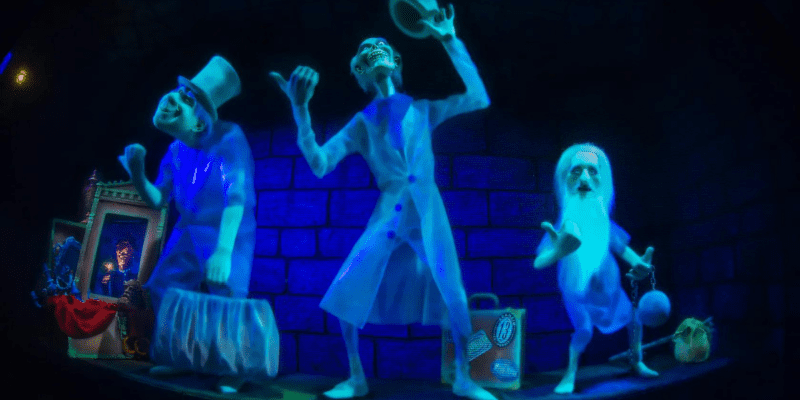 Disneyland is known as the Happiest Place on Earth. Located in southern California, the weather at the Disneyland Resort is sunny and beautiful most of the year. There are so many attractions to ride, parades and nighttime shows to watch, snacks to find, and characters to meet. However, beneath this layer of beauty, magic, and wonder at the Parks lies a more hidden detail – one that is paranormal in nature.

Ghosts at the Disneyland Resort

Legends of ghosts have been spotted throughout the Parks and passed around through stories. Everyone knows about the 999 happy haunts inside the Haunted Mansion attraction, but, according to Disneyland legends and stories, these are not the ghosts that come out to socialize.

There are some Guests who have claimed to see strange happenings at the Park that can’t be explained or have perhaps seen something move out of the corner of their eye that wasn’t supposed to move, but those aren’t the stories we’re focusing on today. Instead, we will be delving into the experiences of some of the most integral parts of the Park- the Cast Members.

Disney Cast Members are vital to the Park- even more so than some of the attractions! The Cast Members aim to provide Guests with the most magical experience. Whether it’s giving directions, helping with Guest needs, enforcing safety measures and crowd control, or just being a friendly face, Cast Members are the backbone of the Park.

And, Cast Members are more involved with the inner workings of the Park, helping with Park opening, closing, ride operations, and more. Because they spend so much time at the attractions and certain areas of the Park each day, they have more of an opportunity to experience these strange phenomena, especially if they heard about these legendary spirits from Cast Members who worked at the same location.

Related: Disney Fans Can See a “Real” Ghost at the Haunted Mansion

On a subreddit called r/Paranormal, user kingdude181 asked the community to share any stories of creepy experiences or weird encounters while at Disney.

As such, user MrBellcaptain shared an experience while working in the shops on Buena Vista Street in California Adventure:

Worked there a while back at the stores in California Adventure after Buena Vista Street opened. One night I was cleaning the shelves in Trolley Treats when the locked automatic doors just opened. Now normally I wouldn’t think anything of it but two fellow cast members behind me checking out registers just stopped and stared. I asked “did those just open on their own?” And they both just nodded. I shrugged and continued my work. About 10 minutes later it did it again, this time I was alone. I got down and checked the door but it wouldn’t even open for me. So no idea what caused it at the time.

I mentioned this event to a lead who told me that the whole Trolley Treats side and the old Burrrrrbank Ice Cream shop were haunted by a little girl who died in the parking lot there back when DCA wasn’t even a dream. She apparently likes messing with the boys and would tease male leads closing up by running up and down aisles late at night.

Another former Cast Member, @parkhoppingduo, shared on TikTok that they used to work in this area of the Park and confirmed similar experiences, which may have been caused by the same ghost.

In this video, @parkhoppingduo shares that from 2013 to 2017, they worked at some of the stores at Disney California Adventure. When the poster eventually was made lead, they opened up Trolley Treats, and a mug flew off the shelf.

Another Cast Member asked if the mugs were still falling and said that it was Jennifer. Jennifer was a little girl who had gone to Disneyland with her uncle and tragically passed away after being crushed by a bus in Disneyland’s parking lot, which is now a part of California Adventure.

In a compilation by Haunted OC, several Guests and Cast Members submitted ghost stories they experienced at Disneyland.

One former Cast Member, Sherilyn B., had a story similar to @parkhoppingduo:

I was working alone to restock Five and Dime. (The merchandise store in Toontown.) Toontown had closed for the night and all the other Cast Members had left. While re-stocking shirts a mug fell off the shelf on the other side of the store. Again no one else in the store but me and I was a good 20 feet away. The shelf is super sturdy and heavy wood attached to the wall.

I worked on Big Thunder Mountain Railroad. I was walking the track after closing and just around the bend from the first lift, I saw a shadow on the mountain wall walking along with me. It was not my shadow. This shadow figure had on a baseball cap; I did not wear my costume hat when doing a track walk. I saw this figure on several occasions when I closed. Yes, I talked to him every time.

Lisa K. also shared a creepy experience about being behind the scenes inside Space Mountain:

Back in the day, cast members would have a locker in a locker room to keep their belongings during their shift and it would also be a place to change out of street clothes and into costume. My locker was inside Space Mountain and, on a few occasions, I’d be in there all alone and hear someone say something and then a door that went to the ride would open and close. A bit creepy late at night.

Several other commenters shared creepy experiences while working at the Parks. Some heard voices of children laughing while closing up at the stroller shop or in New Orleans Square after closing. One commenter saw an elderly woman in a wooden wheelchair at Haunted Mansion who wasn’t really there, another heard footsteps at the Soarin’ Over California ride while no one else was in the room, and one person while cleaning the restrooms experienced a trash can getting moved every time they left the bathroom and came back.

In a related SFGate article, more Cast Member ghost stories were shared about mysterious goings-on at the Disneyland Resort. For example, Ashley Marie Castro was a former Cast Member who experienced hearing the stockroom door open and close while she was alone in the store. Then, shortly after, an item crashed to the ground from off the shelf, and Ashley claims it would not have been possible for it to just fall off.

Darrold Wagner, another former Cast Member, had a creepy tale. Late at night, at the Disneyland Railroad, he would see a train on the command center’s board and hear a whistle blow, even when there was no train. Additionally, his security supervisor would smell cigarette smoke behind Walt Disney’s apartment on Main Street, U.S.A., leading them to think it was Walt himself “sneaking a last smoke,” as he was prone to do.

Legends of Ghosts at the Parks

Finally, in an article from The Orange County Register, we get a glimpse into some of the other Disneyland ghost legends. First, a Cast Member who worked at the infamous Haunted Mansion was interviewed, and she said that some of the female Cast Members have experienced ghosts untying the ribbons in their hair.

She also noticed that props would mysteriously move from one side of the room to the other. And, she mentioned that even some of the Cast Members are afraid to go inside some of the rooms behind the scenes because it is too creepy.

Here are ten different ghost legends at Disneyland, according to The Orange County Register, some of which are very well known to both Disney Cast Members and Guests alike.

Walt Disney’s Apartment – Walt Disney had an apartment above the Fire Station on Main Street, U.S.A. If you look up, you may notice the light in the window. This will always stay on, as legend has it that as a Cast Member went in there one night to turn off the light, she heard a voice saying “I am still here.” Was it Walt Disney himself or just a creepy coincidence?

Mr. One Way – This ghost hangs out on Space Mountain, choosing to sit next to single riders and disappearing after the ride is over. He is said to be a large man with red hair and a red face and has reportedly been seen in the Cast Members’ locker room as well.

Monorail runner – One night in June 1966, a teenager tried to sneak into Disneyland for Grad Nite. His goal was to climb a fence and cross the Monorail track. However, as he was seen by a security guard, he began to run but unfortunately was hit by a Monorail train. The legend is that people can still see the ghost of this runner alongside the Monorail.

Matterhorn ghost – In 1984, a woman named Dolly Young rode the Matterhorn Bobsleds but was killed after being thrown from the bobsled. Cast Members who walk the tracks when this attraction shuts down say that they can hear her. Others call the section where this tragedy occurred “Dolly’s Dip.”

The crying boy – The ghost of a young boy is sometimes seen at the exit of Haunted Mansion. This is because, according to the story, his mother spread his ashes on the ride without Disneyland’s permission. Additionally, this young ghost has been seen on the Pirates of the Caribbean attraction as well.

The man with the cane – There is a man with a cane who is seen at the loading portion of the Haunted Mansion attraction as Guests begin boarding the doom buggies. Some believe this is the spirit of a pilot whose plane went down in the area in the 1940s.

The woman in white – Instead of being a creepy legend like some of these other stories, this woman has been said to help lost children reunite with their parents by leading them to the Disneyland Baby Care Center. She is usually spotted on Main Street, U.S.A. after dark and is dressed in a 19th-century white gown, hence her nickname.

Rivers of America spirit – In June of 1973, two brothers were on Tom Sawyer’s Island after the Park closed. While swimming across the Rivers of America, the older brother drowned. Cast Members have reportedly seen rippling in the water.

The ghost that prefers blondes – In 1967, a teenager was killed on the People Mover ride. Now, as the ride has been shut down since 1995, the legend says that he is still hanging around Tomorrowland, pulling the hair of blonde Guests.

Haunted Mansion test rider – There was a rumor that one of the first test Guests on the Haunted Mansion died from a heart attack inside the mansion in the early 1960s. Though the legend says her death was why the ride did not open until 1969, this has not been proven.

These are just some of the several paranormal and creepy experiences reported by Cast Members at Disneyland. The next time you’re enjoying a day at the Happiest Place on Earth, keep an eye out for some of these legendary ghosts.

Have you ever experienced any ghostly encounters at Disney? If not, which of these legends have you heard?