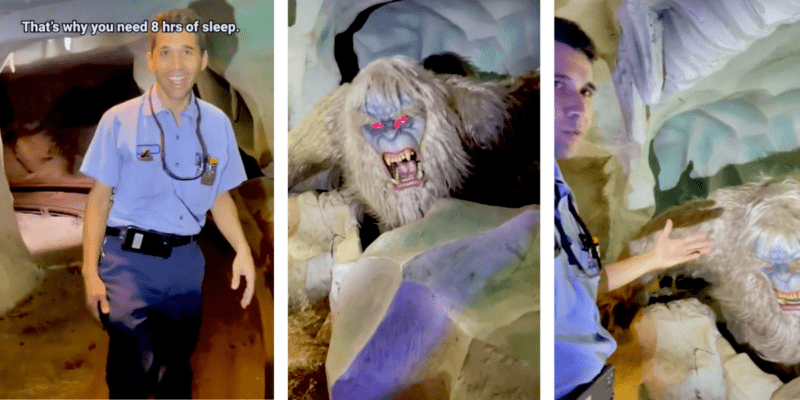 The Matterhorn is one of many iconic Disney Mountains. The first-of-its-kind coaster takes Guests on a chilling journey through the Alps, bobsledding away from the Abominable Snowman!

How many can say they work with an Abominable Snowman? 😄❄️ #Disney #Disneyland #DisneyCastLife

“We go through the attraction, show check all the animation, make sure everything’s running and working,” Mike explains. “Working with the Snowman is very unique because he’s quite large. To see him move, see the wind blowing his fur, and just see him in the cavern there really creates an atmosphere of fear.”

Maybe Mike has tossed a ball in the makeshift basketball court inside Matterhorn Bobsleds!

Matterhorn Bobsleds is unique to Fantasyland in Disneyland Park – no other Disney Park around the world can claim a Matterhorn Mountain! From Disneyland Resort:

Hurtle through a snow-capped mountain on a speeding alpine sled while avoiding the clutches of the Abominable Snowman.

Have you ever been on Matterhorn Bobsleds?

Comments Off on Cast Member Shares Close Up, Backstage Look at Terrifying Animatronic