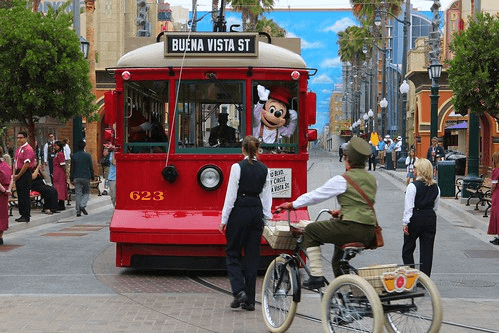 Over the past few months, we’ve seen the return of fan-favorite experiences at the Disney Parks following closures during the ongoing COVID-19 pandemic, including nighttime shows, character meet and greets, and even parking trams.

According to Nexstar theme park reporter Scott Gustin, the infamous red car trolley will return to Southern California this summer. He wrote:

Fans have been asking for the trolley’s return ever since it made a brief appearance for the holidays at Disney California Adventure in 2020. It was originally taken away in April 2019 to make space for construction of the Avengers Campus, which opened in 2021.

According to Orange County Register, the “Red Car News Boys” show that was canceled in 2019 won’t return with the trolley.

Though Disney hasn’t announced a specific date for the trolley’s return, Inside the Magic will keep fans updated on when the attraction will return.

More on the Red Car Trolley

Check out our video from Buena Vista Street at Disney California Adventure to see the red car trolley in action. The trolley is. a unique part of Disneyland Resort, acting both as an attraction and transportation around the Park, much like the Disneyland and Walt Disney World Railroads and a similar trolley on Main Street at Magic Kingdom in Orlando, Florida.

Here’s some more information from Disney:

Hop aboard a charming vintage trolley for a scenic ride through Buena Vista Street and Hollywood Land.

Trolleys run approximately every 12 minutes between the following locations:

Rolling Right Out of History

The Red Car Trolleys are modeled after the Pacific Electric Railway trolleys that crisscrossed the Los Angeles area from 1887 until 1961, with more than 1,000 miles of active track.

Disney California Adventure opened in 2001 as a celebration of all things California. Over the years, the Disney Park has evolved to include the opportunity to step into your favorite film universes from all things Pixar to Avengers Campus.

Guests can ride Radiator Springs Racers through the world of Cars or fly around the globe while aboard Soarin’ Around the World. Disney fans of all ages can enjoy different festivals throughout the year at Pixar Pier — one of the most popular being the Food and Wine Festival. From Disney:

Culinary Delights with a Disney Twist

Embark on an epicurean adventure! Sip wine, taste a smorgasbord of delish dishes and listen to toe-tappin’ musical performances.

The Disney California Adventure Food & Wine Festival serves up heaping helpings of culinary fun for all.

Are you excited to ride The Red Car Trolley when it returns to Disney’s California Adventure this summer? Let us know.

If you want to visit Disneyland on your next family vacation to experience either of the two Disney Parks — Disneyland or Disney’s California Adventure — but aren’t sure where to begin planning, then don’t hesitate to reach out to our friends over at the Authorized Disney Vacation Planners at Academy Travel for a free quote.