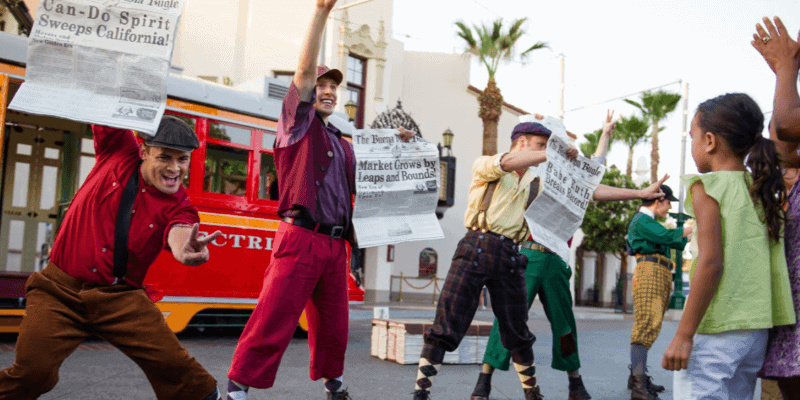 They had a suitcase and a dream, but now it’s time to say goodbye! Amid fan speculation, Disney has confirmed that the Red Car News Boys trolley show is leaving Disney California Adventure this month,

After posts regarding the Red Car Trolley News Boys leaving Buena Vista Street for good flooded social media over this week, OC Register spoke with Disneyland officials to confirm the final performance of the show on July 23. “Based on viewership trends and the needs of our business, we have closed the show,” Disney spokespeople said, according to OC Register. Disneyland officials have shared that the Cast Members who performed in the show could be moved to work in other positions throughout the theme parks.

The Red Car Trolley News Boys is a lively musical show inspired by Disney’s “Newsies,” a musical and movie that features 1920s and ’30s tunes with the message that anyone can be anything. The show opened back in 2012 with the grand opening of Cars Land and the reimagined Buena Vista Street, and the News Boys have been performing alongside Mickey Mouse to share their “suitcase and a dream” with Disney California Adventure guests. Here’s how Disney officially describes the show:

Extra! Extra! Hear All About It!
The boys on the trolley know that you can go from nobody to somebody—just like a fella named Walt Disney who arrived in Los Angeles with just a dream.
Gather ‘round as they sing original songs—and keep your peepers peeled for a young Hollywood hopeful looking for his big break. His name’s Mickey—and maybe one day you’ll see his name in lights!
Catch the Red Car Trolley News Boys performing in Carthay Circle and parading throughout Buena Vista Street and Hollywood Land.

Like many other Disney fans, change can be hard, and it can be difficult to see a show we know and love ending its run at one of our favorite theme parks. But with the closing of a bug’s land to make way for the Marvel-inspired super hero-themed land opening in phases starting next year, we aren’t that surprised by the Red Car Trolley News Boys getting cut. If you take a look at the concept art for the hero-themed land, you can see that the trolley is definitely included as part of the land’s theming…well, sort of. In the background of the image below, there is a red and black trolley or bus, possibly themed after Spider-Man. Disney has kept the plans for the new land pretty under wraps, and it’s unclear whether or not the Marvel theming will extend beyond a bug’s land. But when taking a closer look at the bottom left corner of the concept art behind Gamora, some sort of trolley looks to be included. And even though we love the News Boys, we can’t exactly say that it would make sense for a group of young hopefuls from the 1920s to exist within the world of the Avengers in this new land.

If you haven’t had a chance to see the Red Car Trolley News Boys, head over to Disney California Adventure before their last performance on July 23, or take a look at our video of the show back during its debut performances in 2012.

What do you think of Disney ending the Red Car Trolley News Boys show? Let us know in the comments!