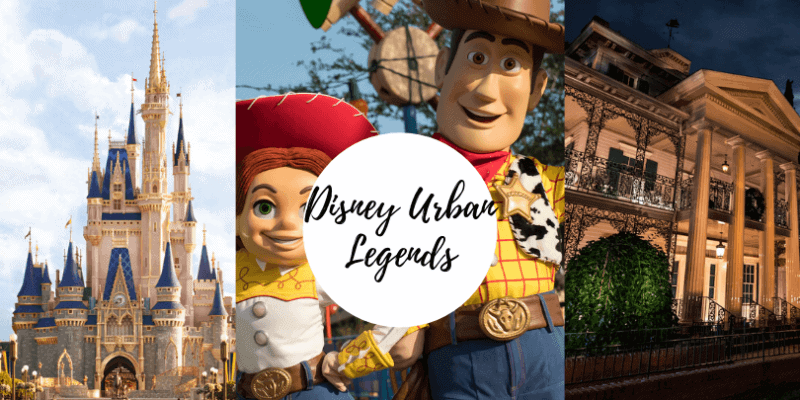 The Walt Disney Company has been around for a long time. And with age comes rumor and with rumor comes legend. Urban legends to be precise.

Disney has perhaps the vastest catalog of stories and incidents that have been canonized into myth and legend.

However, whether about the Disney theme parks, Disney movies, or Mr. Walt Disney himself, you shouldn’t believe everything you hear.

That’s why we’re going to look at five Disney urban legends and bust some popular Disney myths. From an attraction that is allegedly the final resting place of Walt Disney‘s body to a Disney legend about explicit writing in The Lion King, there are so many crazy rumors and most of them are simply not true.

A slightly more recent legend states that Disney‘s Magic Kingdom theme park is more hurricane-proof than we think. Variations on the myth say that the park‘s centerpiece, Cinderella Castle, can either be dismantled, folded up, or in some cases, evacuated into the ground through a secret elevator to save it from intense storms.

Is it true? Not even a little. While the Magic Kingdom, park including Cinderella Castle, is certainly built to withstand Orlando storms, there is nothing to suggest that any of these more extreme measures are true. Anyway, if this mad rumor was real, wouldn’t we have already seen it in action?

Disney urban legend #2 Toy Story characters will drop to the floor when you shout ‘Andy’s Coming!’

Guests have reported seeing their favorite Toy Story character drop at their command at a number of Disney theme parks. It’s a cute detail that imitates how the characters in Toy Story drop to the ground and it lead to a viral rumor a few years back. But is it true?

It sounds like it used to be, but isn’t anymore. In an article on the same myth, Snopes reached out to a Walt Disney World cast member who gave the following statement;

The characters USED to drop to the ground when someone yelled “Andy’s coming.” As of the last week or so, however, they no longer do this. This is because EVERYONE found out about it at the same time (when that meme went viral) and now people are shouting this about 50 times per hour and a half, as opposed to hearing it once or twice a day, like before.

So there you have it. While there’s no official word on the matter from the Disney Parks (shocker), it sounds like health and safety and overuse killed this cute character beat as soon as it got popular.

This urban legend suggests that two-thirds of the way through the 1994 classic, the word ‘sex’ is spelled out in stars above Simba. Allegedly, it was first noticed by a 4-year old boy in New York whose aunt then notified the American Life League who lambasted Disney for inserting adult content into its cartoons. This incident remains unconfirmed and dubious at best, however. Looking at the evidence though, it does look pretty bad.

Is this rumor true? No. One of the film’s animators, Tom Sito has confirmed that while there was indeed a secret word in the sky, it wasn’t sex. It was SFX; or special effects. It’s nothing more than a little easter egg that spun way out of control.

Related: OpEd: Why “A Bug’s Life” is Pixar’s Best Movie

For years and years, the Haunted Mansion has been home to an endless supply of Disney myths and legends, including sightings of more than one real ghost and a dispute as to whether Walt Disney himself is one of the singing busts. But the attraction‘s most prevalent and persistent rumor is that guests regularly spread the remains of their friends and family inside the ride. This can’t be true though, right?

It is 100% true. The Wall Street Journal of all publications did an expose on the practice, and found that spreading ashes at both Disneyland and Walt Disney World is a common occurrence that isn’t limited to the Haunted Mansion. Take a look:

Human ashes have been spread in flower beds, on bushes and on Magic Kingdom lawns; outside the park gates and during fireworks displays; on Pirates of the Caribbean and in the moat underneath the flying elephants of the Dumbo ride. Most frequently of all, according to custodians and park workers, they’ve been dispersed throughout the Haunted Mansion, the 49-year-old attraction featuring an eerie old estate full of imaginary ghosts.

“The Haunted Mansion probably has so much human ashes in it that it’s not even funny,” said one Disneyland custodian.’

Whoa. This true Disney urban legend sure gives me the creeps. The next time I ride this iconic attraction, I know what I won’t be able to stop thinking about!

Where do we begin? We already covered this myth in our things that annoy the Disney fan in all of us article, and the point we made there remains. It’s incredibly disrespectful to suggest that Walt Disney‘s body and/or head are buried underneath the Pirates of the Caribbean ride at Disneyland. The legend himself was cremated just two days after his death in 1966, so this is just all kinds of false. Case closed.

However, in case you haven’t heard the myth, because of Walt Disney‘s status as a futurist and the first Imagineer, a rumor circulated that he was investigating cryogenics before his death. This would apparently allow him to freeze himself just before he passed and emerge at a time where better medical care is available.

But it’s a load of Mickey Mouse droppings.

Any Disney fan will tell you that this urban legend is complete phooey and it’ll be instantly debunked by any Disney historian. Walt may have planned the original city build of EPCOT, but nothing ever suggested that he was interested in cryogenics. If you’re STILL not convinced, How Stuff Works states that the first person to ever be cryogenically frozen was Dr. James Bedford, in December 1967. The year AFTER Walt’s passing.

The only thing Mr. Disney left behind was the happiest place on Earth, and one of the greatest legacies of the 20th century; not a frozen head.

What do you think about this list of Disney urban legends? Would you like to see a second list? Let us know in the comments below.

Comments Off on Mythbusting Popular Disney Urban Legends– Which Are True?