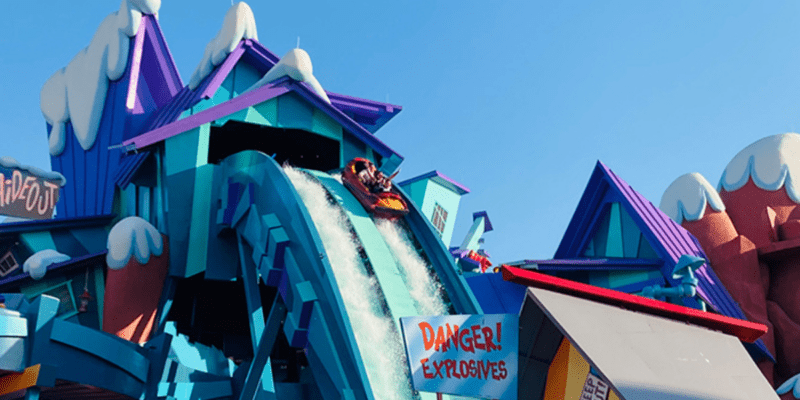 We will surely not have to remind you of the catastrophic event the state of Florida dealt with this Summer, with Hurricane Ian making its way through various cities and counties. The hurricane damaged not only houses and businesses but multiple theme parks.

The natural disaster damaged quite a bit of Universal Studios in Orlando as well, along with surrounding Resorts like Walt Disney World, SeaWorld, and LEGO Land. Pictures went viral on social media showing The Incredible Hulk coaster underwater as well as a photo of the Jurassic Park River Adventure attraction building with a giant hole in it. Though everything eventually got right back on track, one attraction seemed like it may be too damaged to reopen.

Dudley Do-Right’s Ripsaw Falls was forced to close due to extensive damage to the ride from Hurricane Ian.

The attraction is a beloved water ride at Universal Studios Orlando. “Part roller coaster, part water flume, this ride combines the fun of the classic cartoons with edge-of-your-seat action,” says Universal. Since Hurricane Ian, the ride has not been operational.

In October, Universal put a sign in front of the attraction that shared it was “under seasonal maintenance.” Other than on a few occasions when people have noticed the rapids running again, they’ve largely been turned off, until now, that is.
On December 19, the attraction officially reopened following a closure of over two months.s

This was confirmed by Orlando Informer (@OrlandoInformer) on Twitter earlier today:

Grab your trusty steed – it’s time to save the day! Dudley Do-Right’s Ripsaw Falls has reopened from refurbishment after a closure of over two months

Grab your trusty steed – it’s time to save the day! Dudley Do-Right’s Ripsaw Falls has reopened from refurbishment after a closure of over two months. 💦 pic.twitter.com/gw7QqJYTRF

Toon Lagoon, where the attraction is located, has been undergoing refurbishments to buildings and shops around the area. The land is also home to Popeye & Bluto’s Bilge-Rat Barges.

Will you be taking the plunge at Universal Studios?